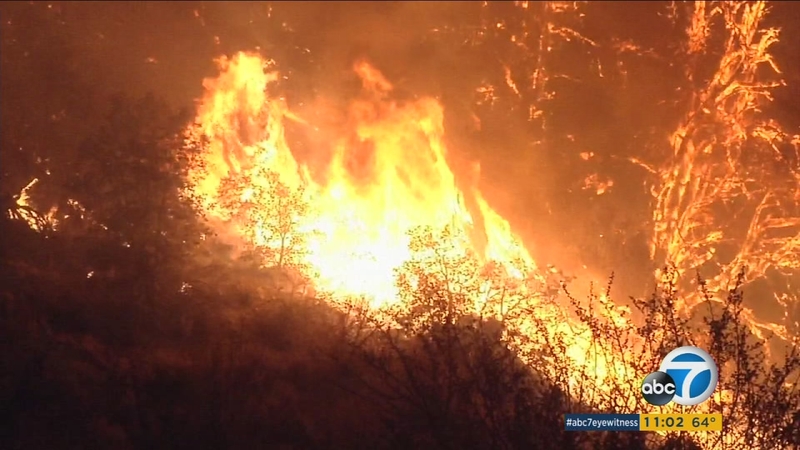 WRIGHTWOOD, Calif. (KABC) -- The massive Blue Cut Fire in the Cajon Pass came dangerously close to Lytle Creek Wednesday as it moved down a ridge near the Mountain Lakes Resort, an RV camping park in the community.

Crews made aggressive water drops to stop the flames that continued ripping through dry brush and eventually succeeded.

People who were at the Lytle Creek RV park were able to safely evacuate the area. A small group of llamas and alpacas were left behind, but luckily survived thanks to the quick efforts of fire crews.

A map shows the location of the Blue Cut Fire, which ignited near the Cajon Pass above Devore.

A mandatory evacuation was ordered for all of Wrightwood, but officials said that only half of the community's 4,500 residents had complied.

Officials estimated that more than 34,000 homes and nearly 83,000 people were under evacuation orders. Authorities could not say how many homes were destroyed in the fire, but they prepared communities for bad news.

"There will be a lot of families that come home to nothing," San Bernardino County Fire Chief Mark Hartwig said during a news conference.

After taking a morning flight over the fire zone, he described the fire scene as "devastating."

"It hit hard. It hit fast. It hit with an intensity that we hadn't seen before," he said.

Some 1,300 firefighters were battling the blaze, which began Tuesday morning as a small brush fire above Devore and quickly exploded in size. Driven by dry brush and gusty conditions, the blaze led Gov. Jerry Brown to issue a state of emergency in the county.

The proclamation provides more state resources to firefighting efforts and grants certain benefits to affected residents, such as waiver of fees for destroyed documents and faster unemployment benefits.

The fast-moving and massive Blue Cut Fire tore through communities and ended up dangerously close to the West Cajon Valley on Wednesday, Aug. 17, 2016.

The airtankers can carry 3,000 gallons of water or fire retardant and release it in less than five seconds over an area one-quarter mile long and 60 feet wide. They can also refill in less than 12 seconds.

The tankers are based at the Channel Islands Air National Guard Base and should be able to help in the firefight by the evening hours.

Residents were also ordered to leave West Cajon Valley, where at least six homes were destroyed by flames. Logan Allbess, who lives in that area, witnessed the early stages of the fire and said it "spread really fast."

"It's weird, but I don't know what you can do about it," he added, as visible smoke billowed nearby. "You just gotta get back on your feet."

Crews in the fire zone on Wednesday are expected to face temperatures in the 90s, winds of 30-40 mph and humidity of 3-10 percent.

"We know we have the wind coming," said Eric Sherwin of the San Bernardino County Fire Department. "We have red flag warnings that are posted for the mountain areas. We're going to hit triple-digit temperatures up in the deserts, so it's going to be a very aggressive attack from both sides of the fire from the firefighters."

All of Wrightwood was evacuated as the Blue Cut Fire continues to explode in size.

By mid-afternoon, Cal Fire spokesman Daniel Berlant said the agency had received reports of winds up to 70 mph "fanning the flames" in the Cajon Pass.

Cadaver dogs will be brought into the burn area Wednesday to search for the possible remains of people who may not have been able to escape the quick-moving blaze, according to the fire department.

Speaking at the news conference, county Sheriff John McMahon urged residents to heed evacuation orders for their own safety.

"When those officers ask you to leave, we would ask that you do leave and not shelter in place," McMahon said. "We would hate for the fire to overrun your neighborhood and you be stuck inside and not have a way out."

Cal Fire encouraged people who were not yet under evacuation orders to visit readyforwildfire.org, as part of preparations to leave their homes at a moment's notice if necessary.