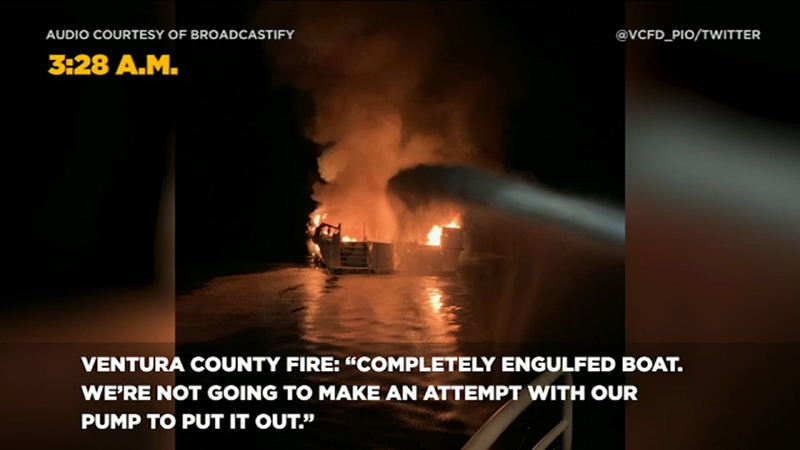 Radio traffic and reports from witnesses and rescue authorities help paint a detailed timeline of how the rescue operations unfolded:

3:14 a.m. The first frantic "Mayday" distress calls are radioed in to the Coast Guard. One person on board the doomed vessel is heard saying "I can't breathe."

The Coast Guard communicates with the crew to find out how many people are on board.


The Coast Guard side of the conversation can be heard more clearly in recordings of the radio traffic:

"Your vessel is on fire, is that correct?"

"There are 33 people on board the vessel that's on fire, they can't get off?"

"Roger, are they locked inside the boat?"

"Roger, can you get back onboard and unlock the boat? Unlock the doors so they can get off?"

"You don't have any firefighter gear at all, no fire extinguishers or anything?"

"And there's no escape hatch for any of the people on board?"

Then at 3:18 a.m., the Coast Guard can be heard broadcasting out the information and asking any vessels in the area to respond.

"We've got people on the way. We're launching everyone."

Five crew members, who had been awake and on the bridge when the fire broke out, jumped off the boat and were rescued by the Grape Escape, a pleasure craft that happened to be in the area.

The severity of the fire and the challenges in fighting the blaze can be heard in the firefighters' communications: "Completely engulfed boat. We're not going to make an attempt with our pump to put it out."

"The main objective is to look for victims."

The search-and-rescue operation continues through the darkness of early morning and into the dawn.

By 8:49 a.m., the Coast Guard puts out a statement confirming the Conception has sunk with a portion of the bow sticking out. At that point, only five people on board the boat were safe and accounted for. The rest were considered missing.

There were 39 people - six crew members and 33 passengers - on board the Conception when it caught fire just off Santa Cruz Island. Five crew members were rescued.