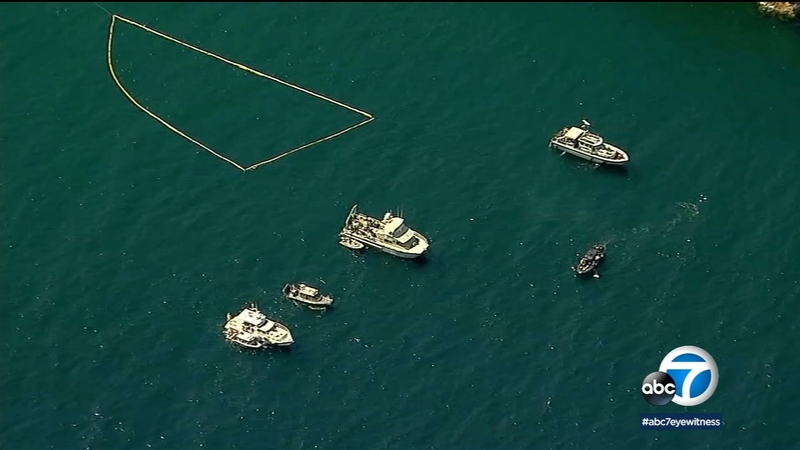 SANTA BARBARA, Calif. (KABC) -- As teams of federal, state and local officials delve into what exactly made a deadly fire break out on a diving boat off the coast of Santa Barbara, officials say determining the cause could take a year or more.

The National Transportation Safety Board said it is coordinating a "very lengthy, detailed and comprehensive investigation" that involves tracking down inspection records and other documents, interviewing crew members and witnesses and filming the submerged wreckage of the Conception before it can be brought back to the surface.

Determining what made the boat catch on fire and then sink could take an estimated 12-18 months, said NTSB official Jennifer Homendy.

"I am 100% confident that our investigators will determine the cause of this fire, why it occurred, how it occurred and what is needed to prevent it from happening again," said Homendy.

In the meantime, though, the agency expects to issue a preliminary report in just 10 days that will review the basic facts of the case, without drawing conclusions about the cause.

One initial finding, though, has already been released.

Results of alcohol testing on four of the five surviving crew members came back negative, U.S. Coast Guard officials confirmed Wednesday. One crew member was being transported to the hospital during the testing and was expected to be tested at a later time.

Results of tests for drugs were still pending, officials said.

The wreckage of the boat is submerged in 60 to 65 feet of water and inverted. Investigators are taking photos and videos of the wreckage before an attempt is made to bring it back to the surface.

NTSB officials also met with families of the victims on Wednesday.

"The biggest thing I wanted to get across was how sorry we are for their loss," Homendy said. I can't imagine what those families are going through right now. It is heartbreaking. This was a horrific tragedy. It is clear that they are devastated and our hearts go out to them."

Authorities said Wednesday they recovered the bodies of 33 people who died in the intense fire on a boat off the coast of Santa Barbara while one person remains missing.

Authorities had previously said that 34 people, of the 39 people aboard the 75-foot Conception, were presumed dead after Monday's pre-dawn fire engulfed the boat named Conception as the victims slept below decks near the island of Santa Cruz during a three-day scuba diving excursion.

Newly released infrared video shows roaring flames and thick smoke billowing out of the boat. The U.S. Coast Guard released the footage of the massive blaze as first responders arrived to the scene. Video shows smoke shooting into the sky as the inferno intensifies. Authorities said the fire was difficult to knock down as it kept reigniting.

Investigators believe vital evidence may have gone down with the ship or drifted out to sea. Authorities will want to produce a timeline of the ship's final voyage from the moment it pulled from a Santa Barbara dock early Saturday morning until dispatchers received the frantic mayday call of the breathless captain overwhelmed by smoke about 20 yards off Santa Cruz Island around 3:15 a.m. Monday, experts said. They will look at the ship's layout and whether the bunk room below deck was too cramped and had enough exits, review maintenance records, even study photos and videos from people who have been on the boat to look for valuable evidence.

As the investigation into the tragedy expands on land and sea, federal and local authorities will be looking not only at determining what went wrong but also seeking lessons that could lead to changes in regulations for commercial vessels.

The deadly fire, which is being investigated with help from the FBI and Bureau of Alcohol, Tobacco, Firearms and Explosives, is being treated as an accident and there's nothing to suggest anything "nefarious," said Santa Barbara County Sheriff Lt. Erik Raney.

Of the 20 people who were recovered earlier in the week, 11 of the victims were females and nine were males, Santa Barbara County Sheriff Bill Brown said at a press conference Tuesday morning.

Most of the recovered victims, including those who suffered "extreme thermal damage," need to be identified by DNA analysis and officials are collecting samples from family members, Brown said.

Portraits emerged Tuesday of some of the victims, including high school students, a science teacher and his daughter, an adventurous marine biologist and a family of five celebrating a birthday.

"As far as me, I'm a part of the community. It's a big loss," said Jon Ford, with the Santa Barbara County Fire Department. "My child that's right over there was on that boat this summer with our Junior (Coast) Guard and I don't think twice. This is a very safe operation, very professional operation."

RELATED: What we know about the victims in deadly blaze off Santa Cruz Island

At the marina in Santa Barbara, a memorial featuring a candle for each of the 34 victims is growing. Family members and friends of the victims gathered to mourn and to seek information.

"She's gone. She's not going to come back," said Claire, a woman who said her older sister was a member of the crew and did not survive. "I texted her yesterday. Even though I knew she wasn't going to respond, just hoping that maybe there was a slight chance maybe she would respond."

"She unfortunately left this earth doing something she loved. She was an amazing person. She had the biggest heart. She was my role model, my big sister. She was everything to me. And she's just gone now."

After flames broke out, five of the six crew members were able to jump overboard and escape on a dingy. Those five crew members had been awake and on the bridge of the boat when the fire sparked.

They were pulled from the water after banging on Bob and Shirley Hansen's pleasure craft. The crew told the Hansens one of the crew members had a girlfriend on board the engulfed boat. One of the rescued individuals suffered a broken leg.

The Hansens say they observed flames and plumes of smoke billowing out of the vessel as several small explosions went off every few minutes, which they believe were caused by the dive tanks.

"It was so overwhelming to come out and see these men there, and look over and see the extent of the fire," Shirley Hansen said. "The flames were shooting up into the sky."

The Hansens were told by the crew that there were three birthday parties on board the boat, including one for a 17-year-old.

"When they opened the galley door, which was the main exit for those people sleeping down below, they said there was so much fire in there that even the roof tiles were on fire and falling from the ceiling already," Bob Hansen said. "So there was no access for them to get to the 34 guests that were below."

Thirty-four candles were placed on a pier near the site of the deadly incident to remember each person who was on the boat.

"It was horrific. I'd never seen such a thing," Bob Hansen said. "There wasn't a part that wasn't burning. Everything was burning on it."

The Conception sank in 64 feet of water as firefighters were battling the blaze, leaving the charter protruding from the water, officials said.


Santa Barbara County Sheriff Bill Brown said it may take some time to identify the deceased because of the condition of the bodies and because they don't have a full manifest of everyone who was on board.

Brown said the situation - a boat fire in the middle of the night, with people trapped at the bottom of a ship - is one of the most difficult operations for rescue crews.

"This is probably the worst-case scenario you could possibly have," Brown said. "Fire is the scourge of any ship."

A man who sprang into action after a diving charter become engulfed in flames near Santa Cruz Island described the deadly blaze as "horrific" with dozens of people apparently trapped below deck.

Family members looking for information about their loved ones are asked to call 833-688-5551. A family assistance center was established at Earl Warren Showgrounds, 3400 Calle Real, Santa Barbara. For information, call 805-696-1188.