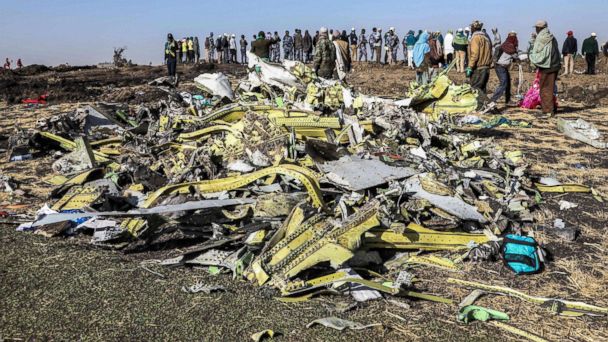 The Boeing Company issued an apology Thursday and, for the first time, acknowledged its automatic flight control system played a role in the two recent plane crashes in Indonesia and Ethiopia that killed everyone on board.

Dennis Muilenburg, CEO of the Chicago-based aircraft manufacturer, apologized for the 346 total lives lost in the October crash of Lion Air Flight 610 and last month's crash of Ethiopian Airlines Flight 302, both of which involved Boeing's new 737 Max 8 jet.

"These tragedies continue to weigh heavily on our hearts and minds," Muilenburg said in a statement Thursday. "The full details of what happened in the two accidents will be issued by the government authorities in the final reports, but, with the release of the preliminary report of the Ethiopian Airlines Flight 302 accident investigation, it's apparent that in both flights the Maneuvering Characteristics Augmentation System, known as MCAS, activated in response to erroneous angle of attack information."

Ethiopian Airlines Flight 302 went down in clear weather in the morning on March 10, six minutes after taking off from Addis Ababa Bole International Airport in Ethiopia's capital. The American-made jet, carrying 149 passengers and 8 crew members, was headed to Nairobi, Kenya.

A 33-page preliminary report released Thursday by the Ethiopian Ministry of Transport's Aircraft Accident Investigation Bureau revealed that the American-made aircraft had a valid certificate of airworthiness, the crew were licensed and qualified to conduct the flight and the plane's takeoff appeared normal. But the jet began nose diving in clear skies just minutes after liftoff from Addis Ababa Bole International Airport in Ethiopia's capital on the morning of March 10. The aircraft, which was headed to Nairobi, Kenya, crashed in a village southeast of the Ethiopian capital, killing all 149 passengers and eight crew members on board.

According to the preliminary report, data from the flight data recorder and cockpit voice recorder indicates that one of the plane's angle-of-attack sensors began fluctuating shortly after takeoff and sent "erroneous" information. This activated a new anti-stall safety system on the Boeing 737 Max 8 that controls trim, known as MCAS, which is believed to have pushed the nose of the aircraft down. The pilots followed the "emergency checklist" but could not take back control of the aircraft, according to the report.

Sources have told ABC News that the Lion Air Boeing 737 Max 8 also struggled to maintain a steady flight path and the MCAS was activated before the jet crashed into the Java Sea off the coast of Indonesia on Oct. 29, 2018.

"The history of our industry shows most accidents are caused by a chain of events. This again is the case here, and we know we can break one of those chain links in these two accidents," Muilenburg said in the statement. "As pilots have told us, erroneous activation of the MCAS function can add to what is already a high workload environment. It's our responsibility to eliminate this risk. We own it and we know how to do it."

Boeing has supplied more than 370 Boeing 737 Max 8 jets to 47 airlines since the model debuted in May 2017, and 72 of them are currently flying in the United States. Since the Lion Air crash, the manufacturer has had teams of engineers and technical experts working with the U.S. Federal Aviation Administration and customers to develop and release a software update to the MCAS, along with an associated comprehensive pilot training and supplementary program for the 737 Max, according to Muilenburg.

"We're nearing completion and anticipate its certification and implementation on the 737 Max fleet worldwide in the weeks ahead," he added. "This update, along with the associated training and additional educational materials that pilots want in the wake of these accidents, will eliminate the possibility of unintended MCAS activation and prevent an MCAS-related accident from ever happening again."

Boeing Commercial Airplanes, a division of the Boeing Company, also acknowledged that the "unintended MCAS activation" were contributing factors in both deadly crashes.

"I'd like to reiterate our deepest sympathies are with the families and loved ones of those who lost their lives in the accident," Boeing Commercial Airplanes president and CEO Kevin McAllister said in a statement Thursday. "Understanding the circumstances that contributed to this accident is critical to ensuring safe flight. We will carefully review the AIB's preliminary report, and will take any and all additional steps necessary to enhance the safety of our aircraft."

The March 10 crash remains under investigation by Ethiopian authorities. The FAA and NTSB are assisting with the probe.

"We continue to work toward a full understanding of all aspects of this accident," the FAA said in a statement Thursday after the preliminary report was released. "As we learn more about the accident and findings become available, we will take appropriate action."