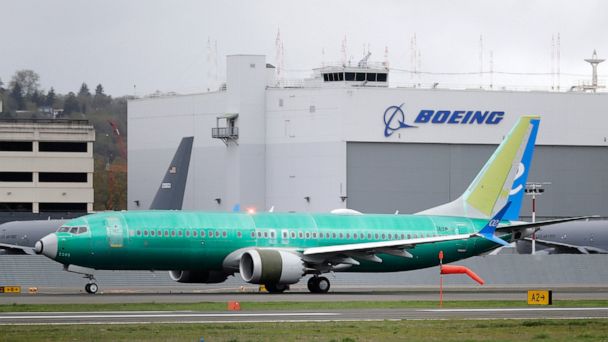 LONDON -- Boeing executives apologized Monday to airlines and the families of those who died in two recent crashes involving its new 737 Max 8 aircraft.

The U.S. plane manufacturer has been in hot water since the separate crashes in Indonesia and Ethiopia and the subsequent grounding of all Max aircraft worldwide.

"We are very sorry for the loss of lives," Kevin McAllister, president and CEO of Boeing's commercial aircraft, said at a press conference at the industry-wide Paris Air Show.

McAllister also apologized "for the disruption" to airlines and passengers as a result.

"It is a pivotal moment for all of us," he added. "It's a time for us to make sure that accidents like this never happen again."

A Boeing 737 Max 8 operated by Ethiopian Airlines went down in clear weather on March 10, just minutes after taking off from Addis Ababa Bole International Airport in Ethiopia's capital. All 157 people on board died.

Another 737 Max 8, operated by Lion Air, crashed into the Java Sea on Oct. 29 shortly after liftoff from Soekarno-Hatta International Airport in Jakarta, Indonesia, killing all 189 people on board.

Investigations into what caused the crashes are still ongoing, but Boeing CEO Dennis Muilenburg has acknowledged that the jet's automatic flight control system played a role in both incidents.

The angle-of-attack sensors malfunctioned, activating a new anti-stall software on the 737 Max 8 that controls trim and is believed to have pushed the nose of the planes down. The pilots were unable to regain control of the aircraft.

Speaking on Sunday before the Paris Air Show, Muilenburg told reporters that Boeing engineers learned in 2017 that a warning light in the cockpit of its top-selling Max, designed to alert pilots when the two angle-of-attack sensors disagreed, didn't work as intended. Muilenburg said it was "unacceptable" the company was not more transparent with aviation authorities and the global traveling public.

As the Paris Air Show kicked off Monday, Boeing executives expressed confidence that software improvements will ensure such tragic accidents never happen again, but wouldn't speculate on when the aircraft could return to the skies.