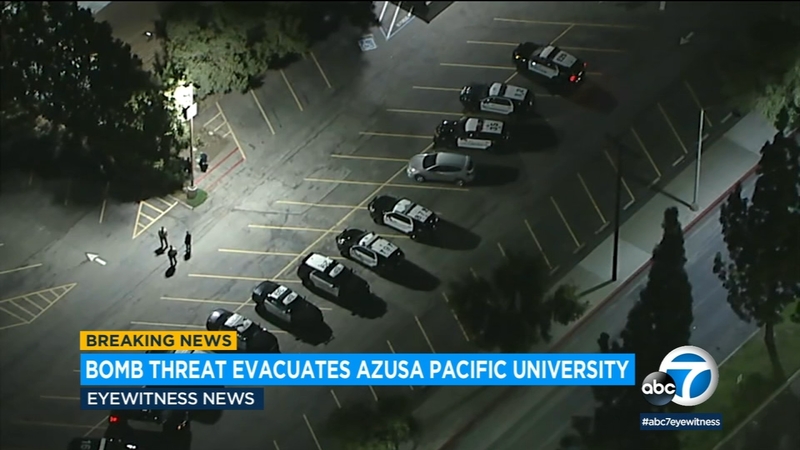 AZUSA, Calif. (KABC) -- Officials determined there is no danger posed to Azusa Pacific University and its regional campuses following a bomb threat that prompted an hours-long evacuation of the sites Wednesday evening.

The university announced the evacuation to the public at around 5:40 p.m. after "suspicious messages of a threatening nature to campus" were received. Students living on campus were told to shelter in place.

The evacuation was later extended to students and personnel at its regional campuses, including Monrovia, Orange County, Koreatown, Inland Empire, High Desert, Murrieta and San Diego.

Investigators said they did not find anything suspicious and do not know who made the threat.

APU EMERGENCY ALERT: APU has received suspicious messages of a threatening nature to campus, including a bomb threat. Azusa Police Department is evacuating both Azusa campuses. If you are at or near the Azusa campuses, follow directions provided by APD & Campus Safety.

Police say they were notified of an e-mail received by campus safety officials stating several explosives had been placed on campus. Multiple agencies assisted local police to investigate at the Azusa campus.

"The e-mail was very specific regarding the threat of an explosive, or explosive devices on campus, so we take all these threats seriously," said Azusa police Cpt. Robert Landeros.

Around 10:40 p.m., law enforcement said there was no longer a threat to the campuses, allowing students to resume their normal activities.

Officers conducted a search of each building at Azusa Pacific during the investigation.

As the investigation was still underway, university officials warned students to stay away from the campus if they weren't in the area.

When the initial evacuation of Azusa Pacific was ordered, just over 100 people were at the campus.
Report a correction or typo
Related topics:
azusalos angeles countybomb threat
Copyright © 2021 KABC-TV. All Rights Reserved.
More Videos
From CNN Newsource affiliates
TOP STORIES