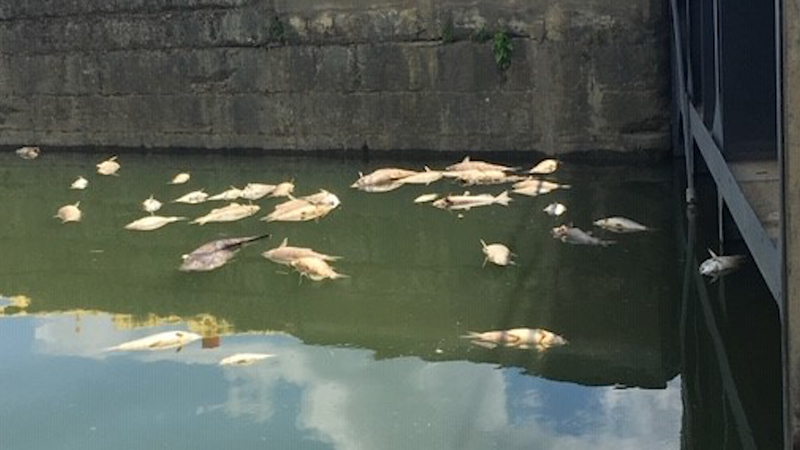 LOUISVILLE, Ky. -- A 23-mile alcohol plume seeped into the Kentucky River as a fire destroyed a Jim Beam warehouse earlier this week, sending bourbon-filled runoff into nearby waterways.

Dead and dying fish have been turning up downriver of the warehouse for days. Officials have worked to aerate the river, adding dissolved oxygen in an attempt to protect wildlife.

Despite the aeration, residents were warned Saturday that they will likely continue to see and smell dead fish in the river. They were cautioned not to eat fish that are already dead and to exercise caution when catching fish that appear to be in distress.

The alcohol plume is expected to dissipate upon reaching the much larger Ohio River at some point Monday. Local emergency officials said they will continue to monitor water quality in the area, and Beam Suntory, which owns Jim Beam, has brought in environmental cleanup contractors and consultants.

The fire, which broke out Tuesday, is out, according to Kentucky Energy and Environment Cabinet. Officials let as much alcohol as possible burn to reduce the flow of bourbon-filled runoff into the river.

No one was injured in the blaze that broke out in the massive warehouse near the Woodford-Franklin County line. It sent flames shooting into the night sky that could be seen for miles and generated so much heat that firetruck lights melted.

Beam's warehouses are equipped with sprinklers, the distiller said Friday. With so much wood and alcohol in the buildings, fire spreads rapidly. Sprinklers activated in the warehouse that burned, it said.

The destroyed whiskey amounted to about 1% of Beam's overall aging bourbon inventory, it said.

Firefighters in Kentucky are trying to extinguish a burning Jim Beam warehouse filled with about 45,000 barrels of bourbon.