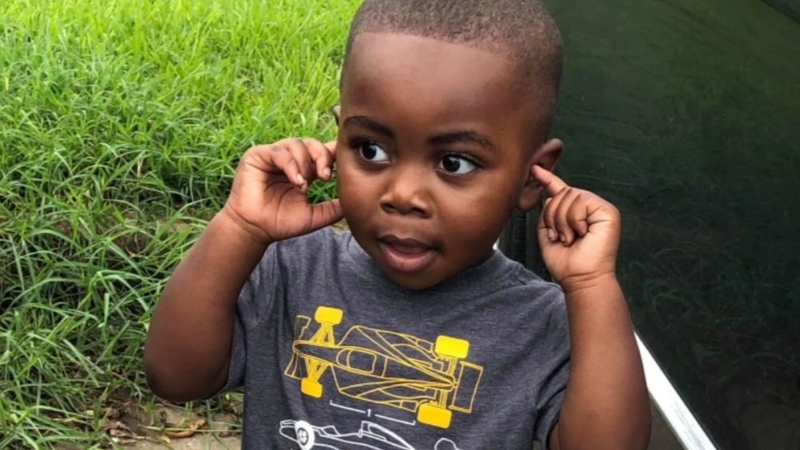 SPRING, Texas -- A 2-year-old boy was killed and his father was wounded when two suspects opened fire at their garage in Texas.

A 2-year-old boy has been shot to death and 2 men wounded during an apparent home invasion robbery at an apartment in the 2800 block of trailing vine. Suspects remain at large. Briefing by Lt. R. Minchew #hounews https://t.co/rsEPggMYY9

According to authorities, the father, his friend and the toddler were in an open garage outside when two suspects started shooting around 11:30 p.m. Tuesday.

Deputies said the father was shot multiple times and was taken to the hospital in critical condition. The friend was shot in the leg and is in stable condition. The toddler was shot and pronounced dead at the scene.
EMBED More News Videos

The mother of the toddler was upstairs with her infant, but thought the shots were fireworks. Authorities said that when she went downstairs, one of the suspects demanded money from her at gunpoint.

Authorities said they don't know if the family was targeted. They said that may be the case, considering the way the father was immediately shot so many times.

This is Ivory West Jr.
He is the little boy who was shot and killed this morning, standing next to his dad. His dad was shot 9-10 times. He’s in the hospital in critical condition. The sheriff says the motive was robbery. Two suspects at large. #abc13 https://t.co/mBrF3kCF9D pic.twitter.com/NLNP2LBgMh

The boy has been identified as 2-year-old Ivory West Jr.

Sheriff Ed Gonzalez was at the scene early Wednesday morning.

"A 2-year-old was brutally murdered for no apparent reason," said Gonzalez.

Gonzalez went on to say that Harris County has seen too much loss of life especially when it comes to children. He included Kamren Cassius Jones, Jazmine Barnes, Maleah Davis as examples.

"This is simply unacceptable," said Gonzalez. "As a community we can't accept it."

Deputies are looking for help in identifying the suspects. They are described as two black men between the ages of 25 and 35 years old. The men are approximately 5'10'' to 6' tall. One of the suspects was wearing a black Nike hoodie with gold letters on the front. The other suspect wore a red hat and a gray t-shirt.

"These are very dangerous individuals that we should all be concerned about," said Gonzalez. "They're out there roaming the streets right now and we don't want them to harm anyone else."