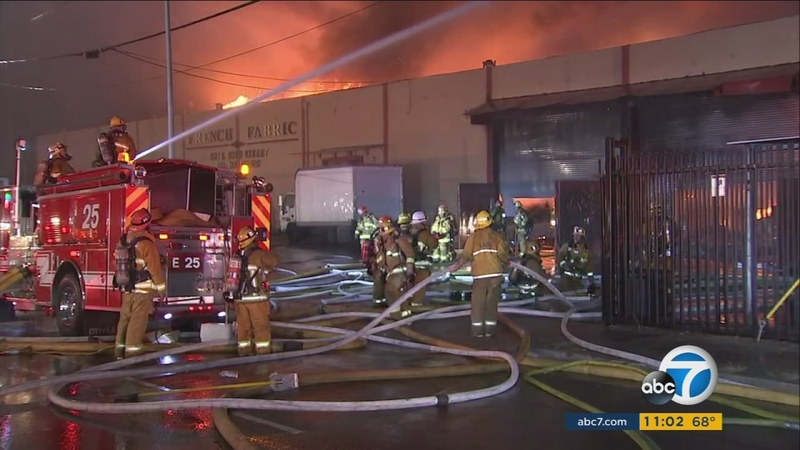 Firefighters responded to a fire in the 1600 block of South Soto Street around 6:40 p.m. The commercial building housed French Fabrics, a fabric-making business.

The fire eventually burned through the roof, sending flames high into the air and causing crews to work more aggressively because of nearby high voltage power lines. Other structures next to the building were also threatened by the blaze.

Witness Ryan Coon said he saw black smoke coming from the building when it first started.

"A lot of smoke, black smoke coming through the roof. Maybe a dozen firefighters, three of those big ladders, and there's a fireball that comes through the roof," he said.

Antoine McKnight, assistant fire chief for Los Angeles Fire Department, said the roof collapsed right after everyone was evacuated from the building.

Firefighters rescued four people from the business at the time of the fire.

Officials said the building was filled with fabrics and other materials that created intense heat during the firefight.

Within an hour, 130 firefighters took control of the blaze and the flames began to dwindle. It was knocked down shortly before 9 p.m.