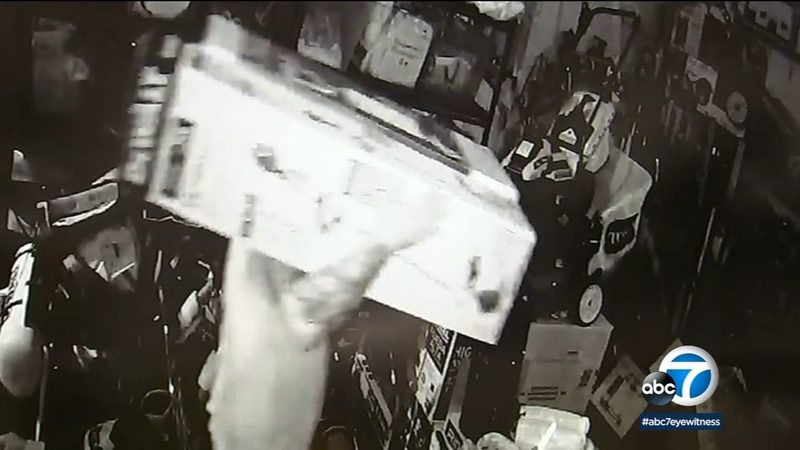 BOYLE HEIGHTS, LOS ANGELES (KABC) -- Karen Sanchez-Urzua couldn't explain why thieves even stole the lock to her mother's store in Boyle Heights, but she could show ABC7 how the hourslong burglary unfolded on surveillance video.

In the footage, first two men fiddle with the lock. Then they disappear.

Moments later, three men break in. Sanchez-Urzua said they walked out with cash from the register, a gold rosary, and tool batteries.

A couple of hours later, a woman and two other men also steal from the store, Novedades Karen Outlet in the 2600 block of East Cesar E. Chavez Avenue.

And then, at 4 a.m. -- some three hours after the initial break-in -- two more men wander inside and walk out with a power washer and air compressors.

"We are going to keep the store open," said Sanchez-Urzua, the store's co-owner. "We don't really have any other choice than to keep going."

While multiple thieves took turns dismantling the family's investment in their store, cameras recorded the entire brazen burglary in the early hours of Saturday morning.

"It's just really heartbreaking seeing the footage of them just taking our stuff with no remorse," Sanchez-Urzua said.

She said they filed a report with the Los Angeles Police Department but her mother's business isn't the only one that has been targeted.

About a month ago, a few doors down on César Chavez Avenue, someone tried to break into a bike shop. But the lock and a neighbor upstairs foiled the break-in.

Sanchez-Urzua has started a GoFundMe page following the break-in at Novedades Karen Outlet, and although worried about retribution she said there's a reason she was speaking out.