Boyle Heights hit-and-run: Arrest made in collision that severely injured father of 5 on bicycle 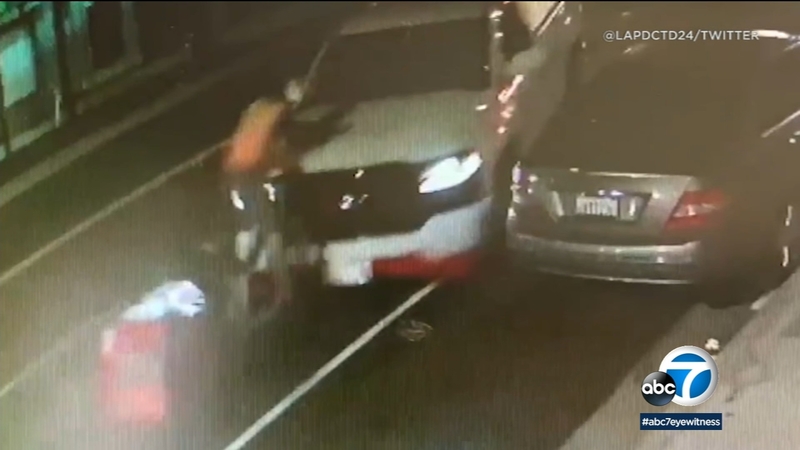 BOYLE HEIGHTS, LOS ANGELES (KABC) -- An arrest has been made in a hit-and-run that severely injured a father of five as he rode his bicycle in Boyle Heights.

Tips from the public led to the arrest of Luis Raya-Flores, 23, a day after police released video of a white pickup truck striking a bicyclist head-on and fleeing the scene on Aug. 22.

Raya-Flores was arrested on suspicion of felony hit-and-run and was being held in lieu of $80,000 bail, police said.

The collision happened on Whittier Boulevard near Calzona Street around 10:20 p.m. that night.
Video shows a white pickup truck driving on the left side of the road in the direction of oncoming traffic and right into the path of a bicyclist. The truck smashes head-on into the bicyclist and immediately flees the scene.

The victim, Gabriel Lopez, spoke to Eyewitness News Monday, saying he continues to suffer a lot of pain from the collision.

He remembers seeing the white truck driving fast and losing control as it crossed into oncoming traffic - and slamming right into him.

"It was so fast, so quick that I cannot do anything," he said.

He spent three days in the hospital, suffering a broken vertebrae and a blood clot. He's grateful he can still walk, though he needs the assistance of a walker and still wears a brace.

One witness said after he saw the collision, he thought the bicyclist had been killed. He called 911 and ran over to help Lopez.
"I thought he was deceased at one point," said the witness, Art. "We kept him alive, we kept him breathing, we kept him not closing his eyes."

Lopez is a father of five and was taking his bicycle to work that night.

He works in construction and doesn't expect to be able to return to work for at least a month and a half.

The city has a reward program that offers up to $25,000 for information leading to the arrest of a hit-and-run driver.

Tips from the public led investigators to Raya-Flores after the video was released, police said.

Additional video of the incident is available here from the LAPD. Warning: Footage depicts moment of impact and may be disturbing to some.