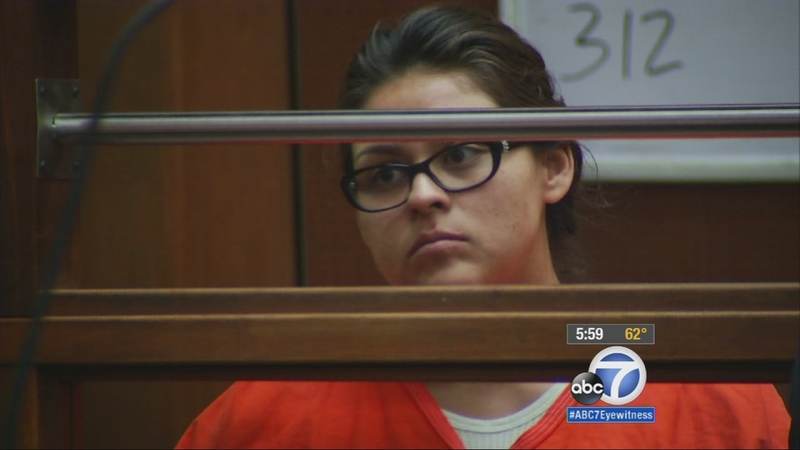 LOS ANGELES (KABC) -- A 27-year-old woman suspected for her involvement in the 2002 kidnapping and murder of an East Lost Angeles teen pleaded not guilty during her arraignment Tuesday.

Rosemary Chavira was arrested Friday near her home in Lancaster for her role in the death of Brenda Sierra. She was charged with felony murder during the commission of a kidnapping and rape, with gang allegations, authorities said.

At 7:30 a.m. on Oct. 18 2002, Sierra, 15, was walking to a friend's home on her way to school when she was kidnapped in the area of Whittier Boulevard and Leonard Avenue in Montebello. Her body was discovered the next day near the "Valley of Enchantment" area in Crestline in San Bernardino County.

According to Los Angeles County Sheriff's Department Homicide Bureau investigators, Chavira lived in the 500 block of South La Verne Avenue in East Los Angeles at the time of Sierra's kidnap and murder.

Authorities believe Sierra was killed by gang members in retaliation after he brother testified in a drive-by shooting case.

It is believed Chavira played a key role in the crime.

"It's our understanding that she actually was a friend of Brenda at the time and coordinated the kidnap itself. Evidence indicates to us that she was present during the rapes and during the murder," LAPD Lt. Dave Coleman said.

Investigators were able to identify the locations Sierra was taken to before she was killed.

Chavira was 15 years old at the time of Sierra's murder, and if she is convicted she could face life in prison without the possibility of parole. A preliminary hearing is scheduled for April 1.

Two of those suspects are currently in custody in connection with other crimes.

Investigators continue to seek the public's help regarding Sierra's kidnap and murder. Anyone with information is asked to contact the LASD Homicide Bureau at (323) 890-5500.