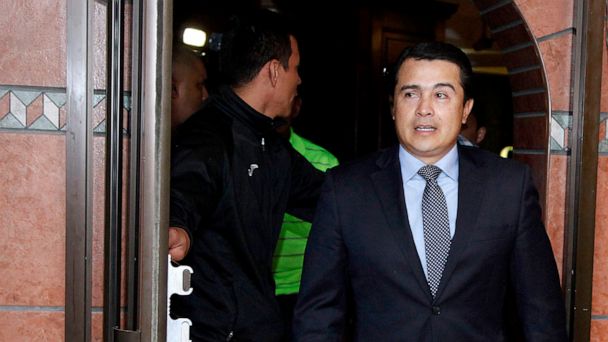 A former Honduran politician is facing life in federal prison for allegedly getting help from his brother, currently the president of the Central American country, in conspiring with massive drug cartels including that of Mexican drug lord Joaquín "El Chapo" Guzmán to smuggle drugs in the United States, prosecutors said.

Federal prosecutor Jason Richman told the jury in opening statements at the Southern District of New York on Wednesday afternoon that since 2004 Juan Antonio "Tony" Hernandez's "profits rose while the country suffered."

"The defendant was protected by and had access to his brother, the current sitting president of Honduras, a man who himself has received millions of dollars in drug-money bribes -- bribes he received from some of the largest cocaine traffickers in the world, bribes he received from men like 'El Chapo' and the Sinaloa cartel, who personally delivered $1 million to the defendant for his brother," Richman said.

Guzman was sentenced by a Brooklyn federal judge to life in prison earlier this year.

Richman intends to prove that Hernandez received bribes to move bricks of cocaine through Honduras, a trans-shipment point, and into the United States with help from his brother, President Juan Orlando Hernandez.

As Juan Orlando Hernandez climbed the political ladder to the presidency, he allegedly provided Juan Antonio Hernandez with information related to law enforcement operations, including highway checkpoints to pass along to drug traffickers.

"The politics in Honduras is like nothing you have ever seen," said Hernandez's defense attorney, Omar Malone, in his opening statements. "You think we have problems between the Democrats and Republicans ... they're the Desert Storm of politics."

Malone said that once Hernandez's brother won the presidency and agreed to extradite drug traffickers to the United States, "all the enemies" targeted his client.

While the Honduran president is not named in the indictment, prosecutors intend to present evidence that he allegedly used the drug money to win elections in 2013 and 2017.

"Our government has a special relationship with Honduras," Malone said.

Last week, the Trump administration signed an agreement with President Hernandez that won't allow asylum seekers to enter the United States through Mexico.

Throughout the two-week trial, prosecutors intend to call as a witness an expert in Honduran politics and at least two cooperating witnesses who trafficked drugs and are responsible for over 100 murders.

"By 2006, the defendant got more greedy and produced his own product in Colombia," Richman said. "And you'll learn that the defendant was so arrogant and so protected that he stamped his cocaine with his own initials, 'TH.'"

Hernandez allegedly transported more than $30 million worth of cocaine, relied on an "armory of weapons including 60 machine guns," and is responsible for two murders.

Hernandez has been indicted for drug trafficking, lying to a federal agent and on weapons charges.