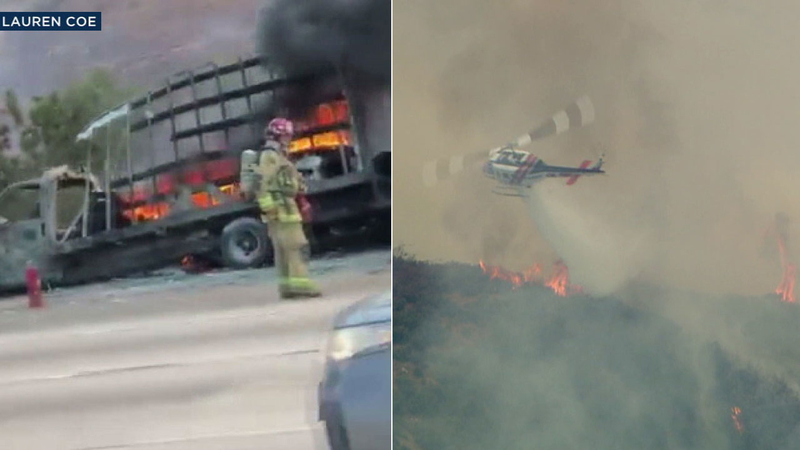 According to San Bernardino County Fire Department officials, the vegetation fire, named the Box Fire, was burning along the northbound 15 Freeway, just north of the 215 Freeway interchange.

The fire was first estimated to be 10 acres at about 10 a.m. The blaze quickly exploded to approximately 100 acres in size by 11 a.m. and was 0 percent contained, according to the San Bernardino National Forest. By 2 p.m., fire officials updated the containment number to 15 percent and said the structure threat had been mitigated.

#BoxFire update. 100 acres and 15% containment. Structure threat is mitigated. 2 firefighters transported by #AMR for evaluation. In Unified Command with @SanBernardinoNF

The blaze started out as a box truck fire and extended to vegetation, heading toward the south and east.

It was unknown how many structures were threatened in the Devore Heights area before the structure threat was mitigated, officials said. No evacuations were ordered by fire officials.

Firefighters from Cal Fire and the San Bernardino FD were battling the blaze with assistance from the U.S. Forest Service, fire officials said. Fire crews appeared to get a quick handle on the flames by midday, as air tankers made massive drops of fire retardant and water.

The fire was burning amid triple-digit temperatures in the area and low humidity.

The northbound 15 Freeway Kenwood off-ramp and truck lane were closed until further notice.

A call center was activated for residents, visitors and commuters. For information, dial (909) 383-5688.