KGO
By by Melanie Woodrow 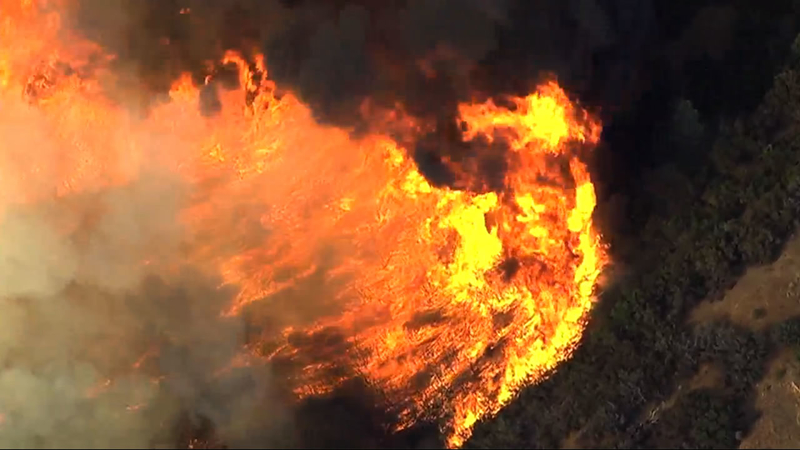 CLEAR LAKE, Calif. -- A wall of flames is moving across Northern California as crews fight for control of a wildfire that's now considered historic in size.

The Rocky Fire has burned 54,000 acres, destroyed at least 24 residences and 26 outbuildings, and threatens 6,300 more homes. The massive fire is still only 5 percent contained. Nearly 2,000 firefighters are working tirelessly to contain the massive blaze.

On Sunday night firefighters were concerned as the wall of flames started moving northwest and across a ridge.

Due to the fire's approach in the western direction, Caltrans says it will close Highway 53 through Lower Lake at about 6:30 p.m. Sunday as a precaution.

#Sky7HD coverage of the #RockyFire. A Fire Tanker dumps retardant along a fire line to contain the massive burn area. pic.twitter.com/x7HU34ofs5

The battle lines for the fire have been drawn on Highway 20. Crews don't want the blaze to jump the road. Crews are out keeping an eye on the hillside on the north in case embers set it on fire.


Camper Dave Andrade and his friends from Concord panicked when they found themselves in the path of the fire."

"At 8 p.m. we saw flames about two ridges over from where we were, so we decided to get out," he said.

But in the mad rush to get out, their RV flipped over the side of steep road and now they're stuck.

Hundreds of nervous residents came to a meeting at Lower Lake High School on Sunday to get updated about the fire. More than 12,000 residents remain out of their homes and so far, there's no word as to when they can return.

Other residents like Linda Fielding are worried she could be the next group to pack up and go.

"Nervous as could be," she said. "We're just, you know, we're getting tired of this."

Lower Lake resident Malorie Krul-Grant added, "I haven't slept for two days. And now I'm concerned about Spring Valley because my nephew lives out there. And it just breaks my heart that so many people have lost their homes."

Several dozen homes have been reduced to ashes. Firefighters are doing all they can to prevent more from being lost. Mandatory evacuations have been ordered for dozens of residents and several highways were closed.

With all the fires in CA many areas are seeing a lot of drift smoke. Check out where that smoke is coming from: http://t.co/Ez7m32AZBd

#Sky7HD Coverage of the #RockyFire near Clear Lake. Our air crew says this fire is unlike any they've seen. pic.twitter.com/eBpNRVhMXl

MODIS satellite image from @NASA today showing the #RockyFire and the smoke billowing off of the 47,000 acre fire. pic.twitter.com/wKTJUWUbaS