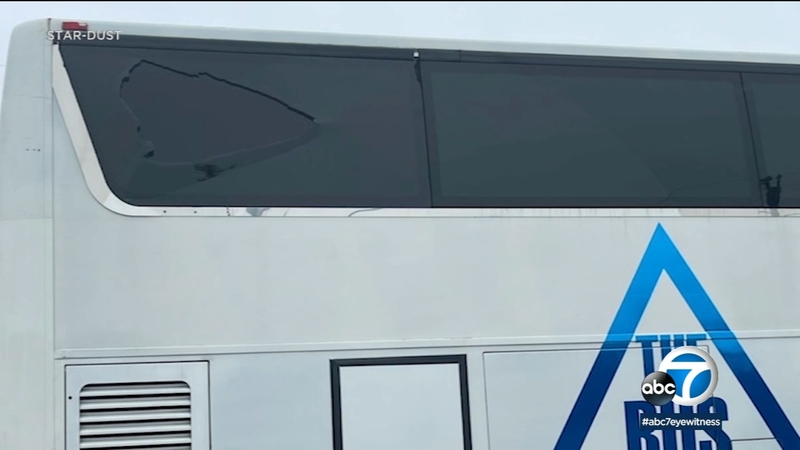 BELLFLOWER, Calif. (KABC) -- After several reported shootings on the 91 Freeway in the Inland Empire, authorities say a bus carrying high school students was shot at by a BB or pellet gun on the 105 Freeway.

Verbum Dei High School students were on board the bus on Tuesday as it was traveling eastbound near Bellflower.

"At first, they thought something hit the bus, a rock or something. And when the coach came downstairs to talk to the driver... they realized that they got shot at," said Frank Gonzalez with Stardust Tours.

Three of the bus' windows were shattered in the shooting, but nobody inside was injured. The California Highway Patrol is investigating.

Authorities are searching for a person who shot and shattered the windows of at least two vehicles on the 91 Freeway in the Corona-Riverside area.

Gonzalez says repairs to the bus will cost around $8,000.

"This really hurts because this should be out today, bringing us some revenue and it's going to be here for a week now until it gets fixed," he added.

Gonzales says his business, Stardust Tours, has just reopened business after being shut down since last March, and now the damage to one of his best buses is setting him back even more.

"You've depleted your savings, you're trying to keep your business going and now we have to deal with this," he said.