Bike repair shop fighting on to stay at USC campus 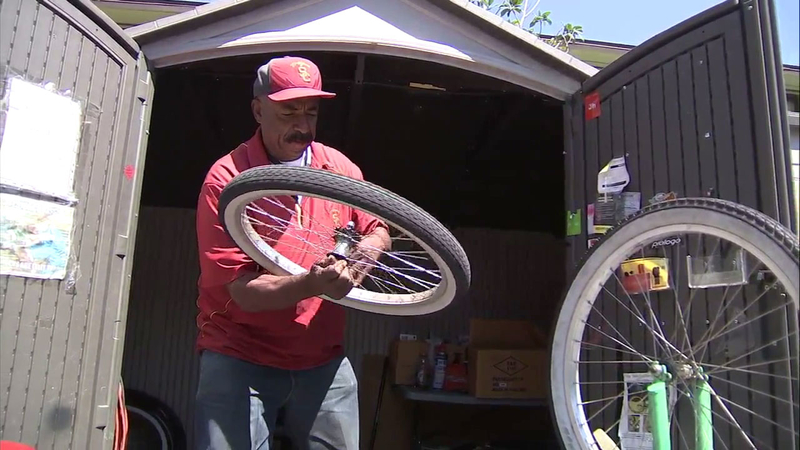 Bike repair shop fighting on to stay at USC campus

Now Lil Bill's shop is being evicted, and some students are trying to save it.

Lil Bill is actually Aaron Flournoy. His dad was Big Bill and he started fixing bikes in the USC area more than 40 years ago. As Aaron began hanging around his dad's shop and helping out, folks just started calling him Lil Bill.

For Flournoy it's about more than just the bikes. Being on campus so long he's developed a sense of family with the many students he's helped over the years.

"I'm their friend, I'm their mentor. I'm father to a lot of these kids," Flournoy said. "It's more than just bikes. It's a personal thing with me."

His dad recently retired at age 81 and Aaron had been running Lil Bill's repair shop in a local church parking lot.

Until the University of Southern California bought the church.

He had to move out, but then USC offered him a new location - at least temporarily. He was fixing flats and straightening crooked wheels in a USC parking lot off McClintock Avenue.

But now he has to leave there, too.

That's because USC has built a $700 million retail and housing development, the Village, on campus. One of the new tenants is a bike store - and it has a no-compete clause for the campus.

So Flournoy has until April 30 to move off campus.

But being on the USC campus means he knows how to fight on.

And some students are helping him. More than 3,000 have signed a petition asking USC to let Lil Bill stay on campus.

For now, however, that seems unlikely.

Besides the non-compete clause, USC says there are other problems with Lil Bill's current location. The city has determined his current site is not appropriate for bicycle repair.

Still, the school said it continues to meet with Lil Bill to trying to find another option.

"This is an unfortunate situation and USC officials are working with the vendor, Aaron Flournoy, to find solutions," according to a statement from Earl Paysinger, USC's vice president of civic engagement.
Related topics:
businesslos angelessouth los angelessmall businessbicycleusc
Copyright © 2021 KABC-TV. All Rights Reserved.
TOP STORIES
Search resumes for Brian Laundrie in Gabby Petito case
Heat advisories issued for most of SoCal on first day of fall
California struggles to conserve water amid historic drought
Growing scam targets Bank of America and Zelle customers
Woman safe after video of possible abduction in Bell Gardens
Movie and film workers might be headed toward a strike
FDA expected to authorize limited wider use of Pfizer booster
Show More
Who is running for mayor of LA? Here are the top contenders
Anti-Black bias events most prevalent in 2020: CA attorney general
Suspects in Kristin Smart disappearance could face trial
Willie Garson, known for 'Sex and the City,' dies at 57
Officials: Many Haitian migrants are being released in US
More TOP STORIES News