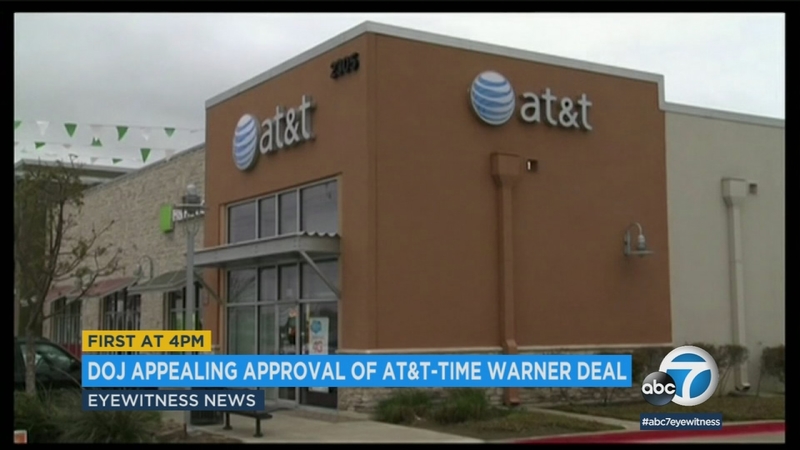 WASHINGTON -- Stung by a federal judge's dismissal of its objections to AT&T's megamerger with Time Warner, the Trump Justice Department is challenging the decision with a legal appeal.

The Justice Department said in a one-sentence document Thursday it is appealing the ruling last month by U.S. District Judge Richard Leon, which blessed one of the biggest media deals ever following a landmark antitrust trial.

Leon rejected the government's argument that the phone and pay-TV giant's $81 billion takeover of the entertainment conglomerate would hurt competition, limit choices and jack up prices for consumers to stream TV and movies.

The Justice Department's appeal is lodged with the U.S. Court of Appeals for the District of Columbia Circuit, a step up from the federal district court where the six-week trial unfolded in the spring.

The merger was swiftly consummated, just two days after Leon's June 12 ruling and almost as soon as the Justice Department signaled it wouldn't seek to temporarily block the merger while it pondered an appeal. The deadline for closing the merger was June 21.

Some legal experts believe the government could have a hard time convincing the appeals court to overturn Leon's ruling. Opposing the merger forced the federal antitrust regulators to argue against standing legal doctrine that favors mergers among companies that don't compete directly with each other.

That type of combination is called a vertical merger.

It was the first time in decades the government had challenged that doctrine by suing to block a vertical merger.

Leon "tried his best to make it appeal-proof," said Fiona Schaeffer, an antitrust attorney at Milbank, Tweed, Hadley & McCloy. Still, the Justice Department apparently believes it has an adequate legal basis to show an error in Leon's ruling, Schaeffer said.

"I think the Department of Justice believes this is a really important case that will influence the legal standard for analyzing vertical mergers in the 21st century," she said. "They've put a lot of resources into challenging this vertical merger in a full trial on the merits. They have already done the heavy lifting on the case, and appealing (Leon's) opinion will be an incremental effort with a significant potential upside."

For its part, AT&T said Thursday it's ready to defend Leon's ruling against the government's appeal.

"The court's decision could hardly have been more thorough, fact-based and well-reasoned," the company's general counsel, David McAtee, said in a statement. "While the losing party in litigation always has the right to appeal if it wishes, we are surprised that the (Justice Department) has chosen to do so under these circumstances. We are ready to defend the court's decision."

From the bench, Leon had urged the government not to ask for a halt to the deal, saying it would bring "a manifestly unjust outcome." The deadline could be missed, allowing under the merger agreement for either company to walk away from the deal and forcing AT&T to pay Time Warner a $500 million "breakup" fee.

AT&T is a phone, cable and satellite behemoth that became the biggest pay-TV provider in the U.S. with its acquisition of DirecTV in 2014. It claims about 25 million of the 90 million or so U.S. households that are pay-TV customers.

The merger fuses a company that produces news and entertainment with one that funnels that programming to consumers. AT&T asserted during the trial that it needed to grow to survive in the era of Google, Amazon and Netflix.

When the deal was first made public in October 2016, it drew fire from then-candidate Donald Trump, who promised to kill it "because it's too much concentration of power in the hands of too few." Trump has publicly feuded with Time Warner's CNN, calling it "failing" and a purveyor of "fake news." The president's statements didn't come up during the trial, though his antipathy loomed in the background.

AT&T has committed to certain conditions under which it will run Time Warner's Turner Broadcasting, which includes CNN. For instance, it will manage the Turner networks as part of a separate business unit, distinct from operations of AT&T Communications, which includes DirecTV and U-verse.

In addition, AT&T Communications will have no say in setting Turner's prices or other terms in contracts with companies that distribute its content.

That apparently wasn't enough, however, to satisfy the Justice Department.

Already the ruling has started opening the floodgates to deal making in the fast-changing worlds of entertainment production and distribution.