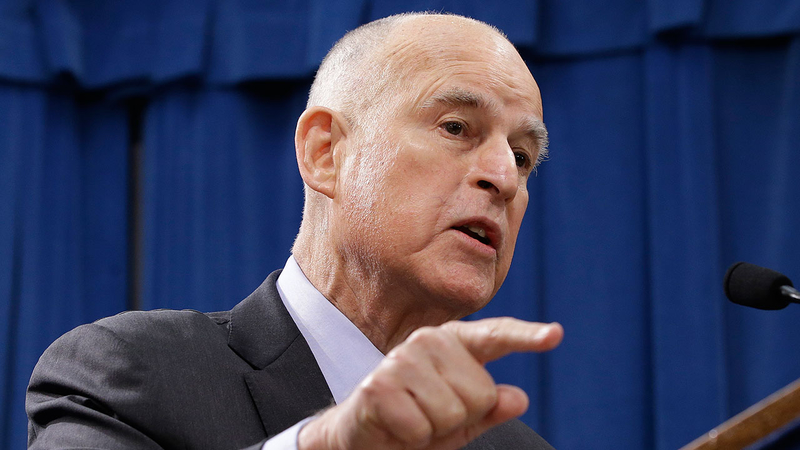 SACRAMENTO, Calif. -- Three Democratic governors say they won't let the United States back away from the global commitment to reduce greenhouse gas emissions despite President Donald Trump withdrawing from an international pact.

Jerry Brown of California, Jay Inslee of Washington state and Andrew Cuomo of New York have formed the U.S. Climate Alliance to uphold the Paris climate agreement. Their announcement Thursday came just after Trump's formal declaration that he intended to remove the U.S. from the deal.

The governors say they're committed to reducing U.S. emissions by 26 to 28 percent from 2005 levels. They're urging other states to join.

Brown has made climate change one of his legacy issues and is calling Trump's decision to withdraw from the agreement "deviant behavior from the highest office in the land."
Brown's full statement on Trump's decision is below:

"Donald Trump has absolutely chosen the wrong course. He's wrong on the facts. America's economy is boosted by following the Paris Agreement. He's wrong on the science. Totally wrong. California will resist this misguided and insane course of action. Trump is AWOL but California is on the field, ready for battle."

Other California elected officials and business leaders were also critical of Trump's decision.

Los Angeles Mayor Eric Garcetti said he is working on a motion with Councilman Mike Bonin to instruct the city's departments to follow the Paris Agreement.

"This is an urgent challenge, and it's much bigger than one person," Garcetti said. "With the president pulling out of the Paris climate agreement, L.A. will lead by committing to the goals of the accord - and will work closely with cities across America and the world to do the same."

Garcetti is a co-founder of the Mayors National Climate Action Agenda, which issued a statement signed by him and 60 other mayors pledging to adhere to the climate agreement.

With POTUS pulling out of the #ParisAgreement, L.A. will stand up to lead - & work with other cities to do the same. https://t.co/RklYG3U5As pic.twitter.com/blssfsoMVq

Paris Climate Accord did not kill US coal. Cheaper energy did. We need to honor coal workers & help them transition, not lie to them.

CA is the antidote to the fear that Trump reinforced today. We've lead the way before, and will continue to do so now. #JoyousPersistence pic.twitter.com/RkCNl9mgOL

At least two prominent business leaders from California, Bob Iger of Disney and Elon Musk of Tesla and SpaceX, said they will resign from the president's business advisory council.

As a matter of principle, I've resigned from the President's Council over the #ParisAgreement withdrawal.

Am departing presidential councils. Climate change is real. Leaving Paris is not good for America or the world.