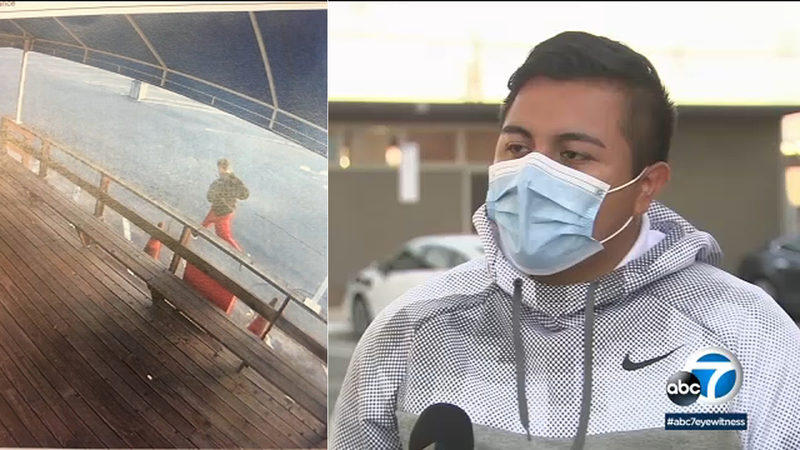 FULLERTON, Calif. (KABC) -- The search is on for a jogger accused of assaulting a Cal State Fullerton student and using racial epithets over an argument about a face mask.

Student Joseph Munoz said he was attacked by a jogger on campus who first asked him about the mask Munoz was wearing and then called him an "idiot" before punching him repeatedly. Munoz said the suspect then used a racial slur.

Munoz says he was walking to his on-campus job around 7:30 a.m. Wednesday when a jogger on the other side of the street asked him a question.

"'Hey can you breathe in that mask?' And I respond yeah and he then proceeds to start saying 'Oh you're an f-ing idiot.'"

Munoz says an argument ensued with both men swearing at each other.

He thought it was ending and they were both heading their separate ways.

But the man then turned around, crossed two lanes to run toward Munoz and started throwing punches. Munoz fought back and the suspect then retreated back to the sidewalk. That's when the suspect started using racial slurs.

The incident happened just steps from the campus police station. Munoz ran over to report the incident and the attacker fled north toward Yorba Linda Boulevard. Munoz had a bloody nose and bruises on his face.

The suspect is described as a white male in his late 20s, standing about 5 feet 10 inches tall, wearing red sweatpants and a gray sweatshirt, with brown hair and a stubble beard.

The school issued an email alerting the Titan community of the ongoing search and investigation. In response to the racial epithet, the school called an emergency meeting of the Campus Climate Response Team.

University president Fram Virjee sent out a note to the campus alerting them of the attack and noting that "violence and threats of violence will not be tolerated in our campus community."