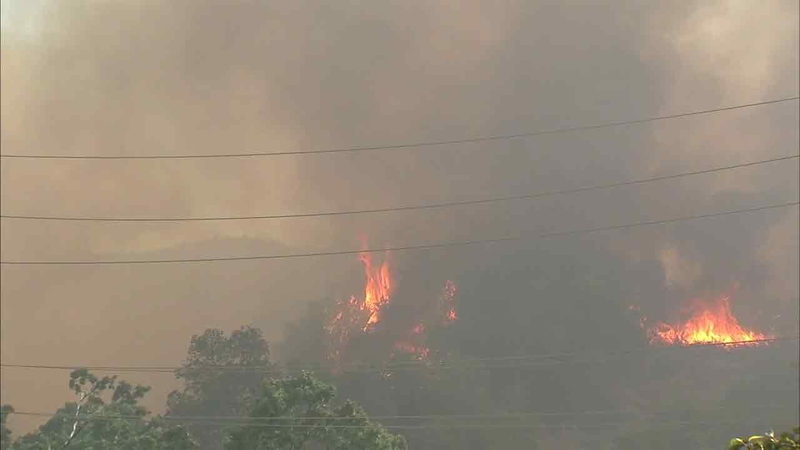 CALABASAS, Calif. (KABC) -- About 400 firefighters continued on Sunday to fight a 516-acre brush fire burning in Calabasas over the weekend.

Fire crews stated several structures were reached by the fire, including one home with minor damage and a commercial building that was destroyed. Three firefighters were also injured in the fire fight, mainly due to the steep terrain.

"If anyone is familiar with the area, we're talking about very steep terrain, very limited access, very windy roads. This is very difficult for our apparatuses...they are very large pieces of machinery, they need a lot of room to operate...," said Edward Osorio of the L.A. County Fire Department.

About 3,000 homes were initially evacuated, but many Calabasas residents were allowed to return at about 2 a.m., according to L.A. County fire officials. Mandatory evacuations were lifted for the Calabasas area but were still in effect for Topanga Canyon, mainly due to dry fuels.

Capt. Keith Mora stated the initial call on the fire Saturday was around 4:10 p.m. for a car crash into a power pole with power lines down.

Deputies with the Los Angeles County Sheriff's Department said a black truck struck a pole in the 2300 block of Mulholland Highway. Witnesses told investigators the truck was speeding before it hit the power pole, knocking it over and causing a transformer to explode, sparking the fire.

The California Highway Patrol announced that Topanga Canyon Boulevard between the Pacific Coast Highway and Cezanne Avenue would be closed until further notice.

Ashes from the fire were reported in North Hollywood and Burbank, and even as far as Arcadia.

The South Coast Air Quality Management District issued a smoke advisory in the San Fernando Valley, Santa Clarita Valley and surrounding areas due to the fire. Officials said the blaze has caused poor air quality and urged all individuals in these areas, or areas where there is visible smoke or the odor of smoke, to avoid unnecessary outdoor exposure.