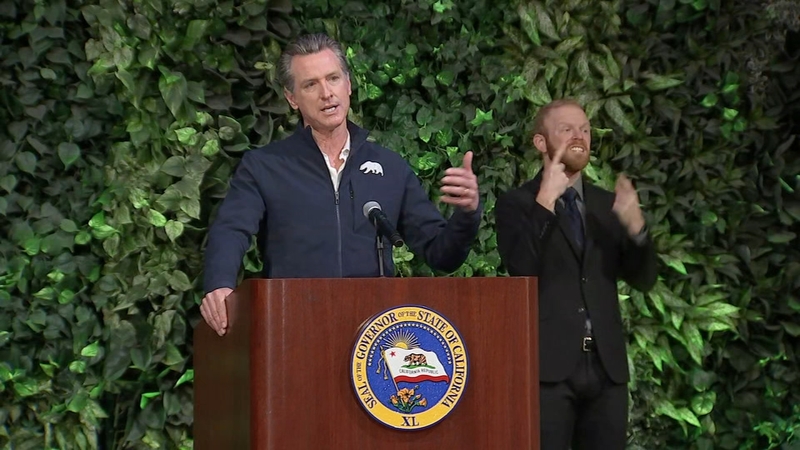 LONG BEACH -- Gov. Gavin Newsom visited Long Beach on Monday to highlight the city's leadership in administering COVID-19 vaccines to residents and to provide an update on the state's efforts to ramp up inoculations.

After greeting about 100 people who work at the Long Beach Convention Center vaccination site, the governor stepped to a podium to deliver his remarks.

"I said to the team outside -- that includes National Guard men and women, firefighters, nurses now from all over the country that are also helping support these collective efforts -- that success leaves clues," Newsom said. "And we have been able to model the success here in Long Beach in other municipalities -- large and small -- all across the state of California."

He applauded the city's efforts to vaccinate teachers and other essential worker efficiently, while acknowledging the shortfalls seen in other areas across the state.

"Sites all across the state of California are toggling back based on limited supply. That's a manufacturing issue."

Gov. Gavin Newsom and state lawmakers have reached a deal on a COVID-19 relief package that would provide $600 payments to low-income families.

Mayor Robert Garcia noted that his city began administering vaccinations to educators almost immediately after the governor and the state "said you can start vaccinating teachers."

"That's allowed us to have a plan to reopen schools safely this upcoming month, next month," said Garcia, whose mother and stepfather died of COVID-19 in August.

The governor, who visited two mobile vaccination sites in Los Angeles on Sunday, was continuing his Southern California tour as the state looks to increase efforts to reach hard-to-reach and disproportionately impacted communities in California.

Progress is being made, as Newsom announced 7.3 million doses have been administered statewide. However, the governor acknowledged that many communities have struggled to keep up with the demand for vaccinations.

Newsom said federal and state officials are doing all they can to inoculate as many people as possible.

Newsom on Monday promoted the reopening of schools and discussed more vaccine availability for teachers..
Beginning March 1, California will set aside 10% of all of the first-round vaccine doses it receives specifically for teachers, educators and childcare workers.

The change will start with a beginning baseline of at least 75,000 doses a week.

"We have 1,000 plus schools that are open, most are operating overwhelmingly well -- favorably -- without any transmissions," Newsom said. "There are a few that are exceptions/ We gotta do more in enforcement, more in transparency, more support. But at the end of the day, we can do this now as we administer more doses; yes, prioritizing our teachers, more vaccines in people's arms. But let's not use 'perfect' as an excuse to safely, thoughtfully, judiciously and strategically get our youngest kids back in first."

Meanwhile, California's new system of delivering, tracking and scheduling coronavirus vaccines is being rolled out in select counties, a first step in Newsom's plan to smooth out what has been a confusing and disjointed rollout hampered by limited national supply.

Newsom announced last month that his administration had tapped insurer Blue Shield to design and manage a centralized system to get doses out quickly and equitably. He said the state also needs robust data to ensure vaccines are distributed equitably and reach low-income communities, largely Latino and Black, disproportionately affected by the pandemic.
An initial list provided by the state showed 10 counties in the inland sections of central and Southern California chosen to be the first to make the transition to the Blue Shield system this week, although one county said Friday it would shift later. While the counties understand the goals, there's confusion about what changes will occur.

California legislators have agreed on a $6.5 billion school reopening plan aimed at getting students back in classrooms this spring.

In addition to Fresno and Kern, other counties in the initial group include Riverside, Kings, Imperial, Madera, Merced, San Joaquin and Stanislaus. Starting March 3, another group that includes Los Angeles, which has 10 million of California's nearly 40 million residents, will be added.

San Francisco is among the counties being added in mid-March, though the dates and counties in each group are subject to change.