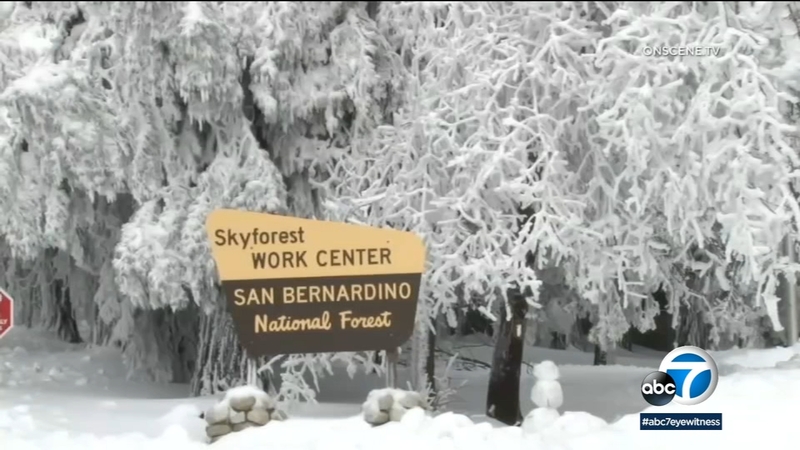 California seeing one of its snowiest Decembers on record

Still, it's too early to determine whether California will see enough rain and snow in the months to come to put a dent in the drought.

The state is "definitely not out of the woods quite yet," said Sean de Guzman, manager of the snow surveys and water supply forecasting for the California Department of Water Resources.

About a third of California's water supply comes from snow as it melts and flows down from the Sierra Nevada and the Shasta-Trinity mountain range in northern California.

"As of Dec. 28, the California statewide average of snow water content is 159% of normal for that date," the Drought Monitor said in a statement. "Given the favorable snowpack and heavy precipitation during December, additional improvements may be warranted for California during subsequent weeks."

Thursday's latest round of rain created a watery mess at Union Station in Los Angeles - which remained open as travelers had to navigate streams of water to reach their destinations.

California just finished its second-driest year on record and many of the state's reservoirs that supply water for tens of millions of people are at historic lows. But several powerful storms swept through the state this month, dumping snow and causing some road closures and major disruptions.

The storms made for a far more positive snow reading than last December, when water levels in the snowpack were at just 52% of the historical average.

Feet of snow don't translate directly into feet of water, so state officials report both the height of the snow and the amount of water runoff it would generate. At Phillips Station, where the Thursday measurement was taken, de Guzman reported 78.5 inches (199.4 centimeters) of snow. That contains 20 inches (50.8 centimeters) of water, he said.

Drought almost busted!! The new US drought monitor report shows parts of LA County moving from D3 to D2 and OC going from D2 to D1. The recent rain and snow has really helped! @ABC7 pic.twitter.com/9qgmBUR6ga

That's 202% of the historical average for that location and 82% of what's typically there on April 1, when the snowpack hits its peak. De Guzman said the state needs strong precipitation in the next three months to get to or above the typical April average, leaving plenty of water to run down the mountains and into California's streams and reservoirs.

Meanwhile, state Department of Water Resources Director Karla Nemeth said the strong December numbers don't change the state's plea for Californians to conserve water. Democratic Gov. Gavin Newsom called for a voluntarily 15% reduction in water use back in July, but the state is far from meeting that goal. State officials have warned mandatory water restrictions could be coming if conditions don't improve.

"We need more storms and average temperatures this winter and spring, and we can't be sure it's coming," Nemeth said in a statement. "So, it's important that we continue to do our part to keep conserving - we will need that water this summer."

In 2013, California saw a wet December followed by an extremely dry January and February during the last drought, state officials noted in a news release.

California is in its second acute drought in the last decade. Scientists say much of the U.S. West is enveloped in a megadrought made worse by climate change.

Most of California is in a severe to extreme drought, according to the U.S. Drought Monitor. Only a small part of northern California along the Oregon border is in what's considered an "exceptional drought," the worst condition. That's down significantly from September, when 45% of the state was gripped by exceptional drought.