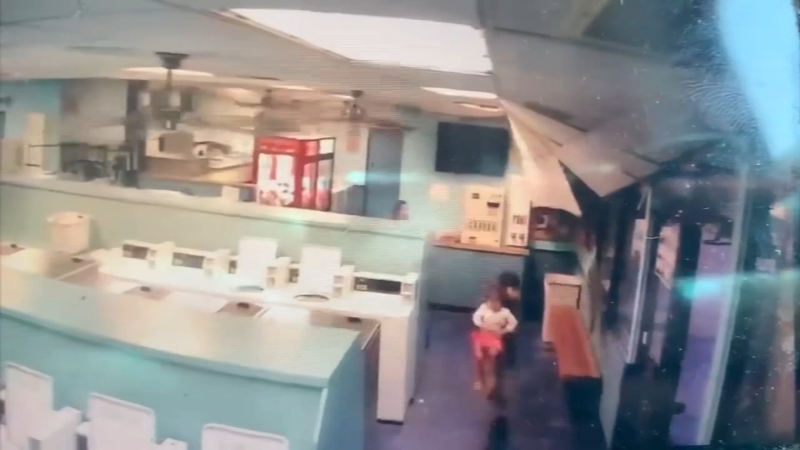 Family inside Ridgecrest laundromat frantically runs out during Friday's earthquake

FRESNO, Calif. -- New video shows the moments a family inside a Ridgecrest laundromat frantically ran out of the door during Friday night's jolting earthquake.

A little boy inside is seen picking up a little girl and carrying her in his arms, seconds later parts of the ceiling collapsed.

The damage even took a toll on Highway 178. Parts of the roadway were repaired during Friday afternoon but were buckled again after the second quake.

As crews patched the cracks overnight, a 4.4 magnitude aftershock rattled the ground.

Things are starting to move up in Trona; the small town was left in the dark for nearly eight hours following the quake. Now power is restored, but residents are without running water.

FULL VIDEO: A little boy inside the building is seen picking up a little girl and carrying her in his arms, seconds later parts of the ceiling collapse.

"We were inside the house, and it was hectic everything was moving never seen something like that," said resident Art Rivera.

In Ridgecrest, cleanup efforts are underway at a market for the second time in three days.

"I know how much this store means to my dad, so I knew it had such a profound impact on him and that got me devastated," said Valerie Abdullatif.

Her father, the owner of the store, does not have earthquake insurance and is preparing for a big financial hit. Family members from out of town have stepped in to help Abdullatif's father.