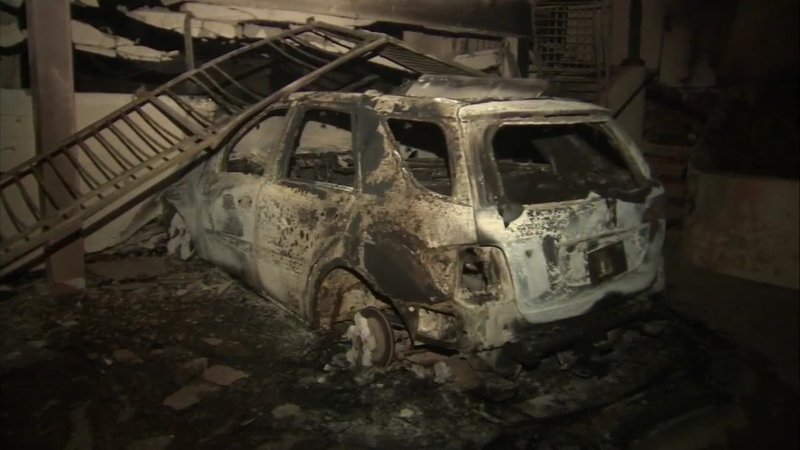 Woolsey Fire burns more than 83,200 acres as it burns in LA-Ventura County area

THOUSAND OAKS, Calif. (KABC) -- The Woolsey Fire continued to burn out of control for a third day in parts of Los Angeles and Ventura counties on Saturday as thousands remain evacuated and more than 100 homes were destroyed.

The blaze doubled in size overnight to 70,000 acres and by nightfall it grew to 83,275 acres. Crews were able to get 5 percent containment, according to fire officials.

Firefighters have appeared to make progress in their firefight as winds died down overnight and early Saturday. Calmer gusts are expected to remain throughout the day until another round of ferocious Santa Ana winds return Sunday morning. A red flag warning is in place through at least Tuesday.

Residnets who were evacuated from Lake Sherwood, Westlake Village and Oak Park saw the devastation left behind from the Woolsey Fire.

Meantime, a death investigation is underway in Malibu. L.A. County Sheriff's officials told the L.A. County Coroner's office they believe two deaths in the area may be related to the fire. The severely burned bodies were discovered inside a stopped vehicle in a long narrow driveway around 4:43 p.m. Friday in the 33000 block of Mulholland Highway.

No other injuries have been reported.

Acting Gov. Gavin Newsom declared a state of emergency in Los Angeles and Ventura counties due to the Woolsey Fire and the nearby Hill Fire. President Donald Trump also approved an emergency declaration for the state.

The fast-moving Woolsey Fire jumped the 101 Freeway at Liberty Canyon Road early Friday, which led the blaze to rapidly make its way toward several populated communities.

Officials said Friday night about 150 homes have been destroyed in both counties. By Saturday night, the number had increased to 177 structures, while only two have been damaged.

Among the homes ruined in the blaze, several were in the Oak Park area as well as Bell Canyon.

The Woolsey Fire started in Simi Valley near the Rocketdyne facility in the Santa Susana Pass.

The blaze also burned the beloved Western Town at Paramount Ranch in Agoura, where popular shows such as "Westworld" and "M*A*S*H" were filmed.

Homes were also destroyed in West Hills as the fire quickly entered the San Fernando Valley Friday night. Evacuation orders were issued for the entire community.

Many areas in Simi Valley were also placed under mandatory evacuations as the fire moved back toward the city by Friday afternoon. By Saturday night, all evacuations were lifted.

As of Saturday afternoon, SoCal Edison reported that 13,700 customers were without power and that anyone in the fire areas may have internet outages if they have Spectrum.

A second fire, dubbed the Hill Fire, burning in the Santa Rosa Valley east of Camarillo, west of Simi Valley near Newbury Park and Thousand Oaks, was mere miles from the scene of a deadly mass shooting that claimed 12 lives Wednesday night. Fire officials said the fire activity in the Hill Fire zone has diminished, allowing more resources to be more focused on the Woolsey Fire.

Authorities said a town hall will be held at Taft High School in the San Fernando Valley at 5 p.m. for people who've been impacted by the fires to get more information.