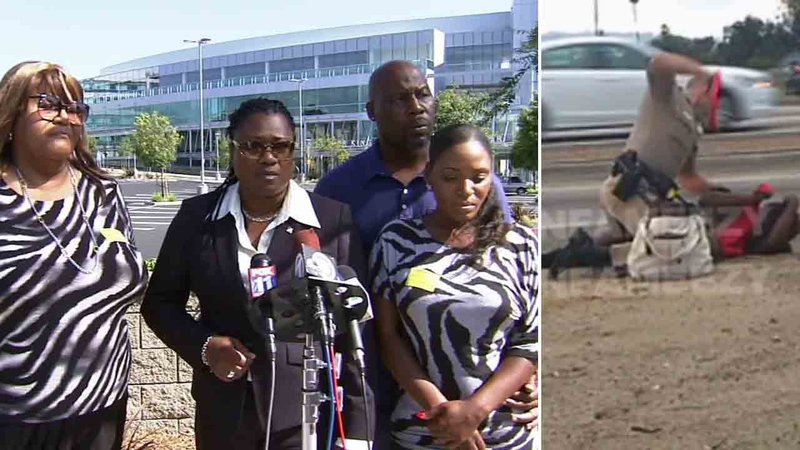 LOS ANGELES (KABC) -- The family of a woman captured on video being tackled and punched by a California Highway Patrol officer has spoken out for the first time.

"He punched and pound and pound on her, the only thing she could do was block her face," Mayisha Adams, the victim's daughter, said.

It's footage you saw first on Eyewitness News: A passing driver who recorded the video says the woman was walking along the eastbound 10 Freeway barefoot when the officer pinned her down and repeatedly struck her. The incident occurred on the La Brea Avenue on-ramp in the Mid-City area Tuesday.

In the video, Marleen Pinnock, 51, is seen struggling and attempting to sit up while a CHP officer repeatedly punches her in the face.

An off-duty law enforcement officer shortly appears and helps him handcuff her.

The CHP says the officer was trying to stop Pinnock who was walking in and out of traffic lanes when the confrontation occurred.

Pinnock's family has hired L.A. attorney Caree Harper to take on the case.

She says the family wants authorities held accountable for "beating a great-grandmother in broad daylight."

"She is injured, both physically, emotionally and every way humanly possible. She was not treated like a human and it's not acceptable in this country or anywhere else," Harper said.

Harper declined to answer questions about what Pinnock was doing along the edge of one of Los Angeles' busiest freeways, and says the focus should remain on the officer.

"The focal point of what she did on the freeway is simple: she got beat. She got savagely beat by someone who seemed like he was trying out for mixed martial arts, and it is absolutely unacceptable," Harper said.

The CHP officer involved in the violence confrontation is on administrative leave while CHP investigates.

"When asked if she sustained any injuries, the pedestrian did not advise of any nor were any located by the officers at the scene," according to the CHP statement.

The CHP says Pinnock refused to give her name at the time and listed her as Jane Doe. Her family claims the department tried to hide her and say it took days to track her down.