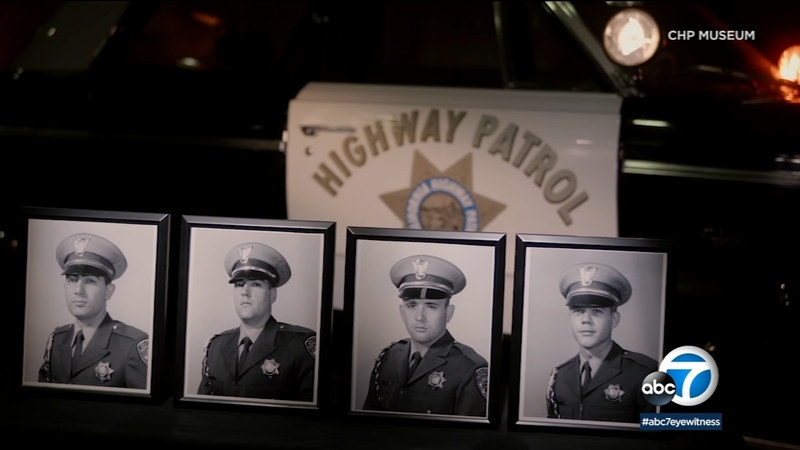 NEWHALL, Calif. (KABC) -- It was April 6, 1970 when four California Highway Patrol officers from the Newhall station were gunned down by two career criminals. The rampage marked a new era for spree killings and sparked a revolution in safety reforms for officers.

"Things like this never happened. It just didn't happen. It brought I think the whole department and law enforcement in general out of the Dark Ages. We were shocked," says Spike Helmick, who was there that night and later became CHP commissioner.

"I'm hearing it on TV that four young officers had been shot and killed. And then the next thing I knew they were coming to the door and I found out what happened," says widow Nikki Frago of Fresno.

All the officers were under 25 years old. Roger Gore, Walt Frago, George Alleyn and James Pence all left toddlers at home who would grow up without fathers.

A top-to-bottom analysis of the shooting resulted in new tactics, weapons, procedures and tactical equipment. Police agencies across the country geared up for a new age of criminality.

There was no awareness of PTSD, a condition that would haunt some officers. Departments also lacked programs to support officers' families. Widows were left struggling.

"So this was very horrendous for me and I had to try to explain to a three- and four-year-olds why dad is not coming home anymore," says Frago.

A stretch of the 5 Freeway near the Newhall CHP station is dedicated to the four officers.

Frago urges the thousands on the road to remember those who paid for citizen safety with their lives.

"I'm glad to be able to tell my daughters, that at least with the death of their father it saved lives," says Frago. "That is huge. That is huge."