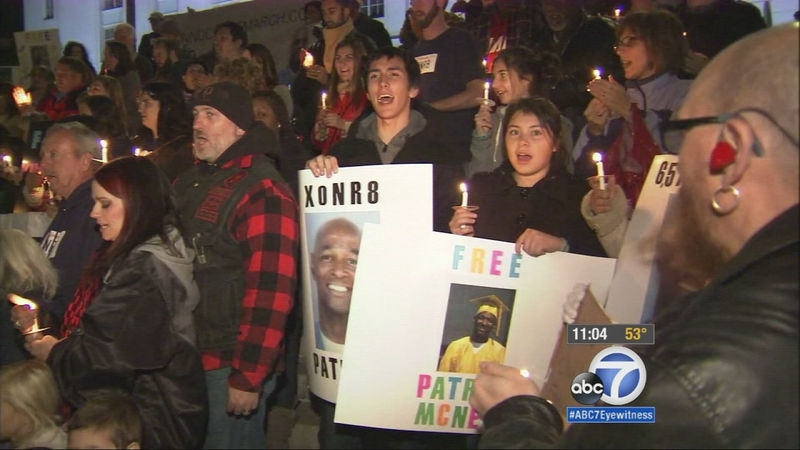 LOS ANGELES (KABC) -- The California Innocence Project held a march on the steps of City Hall Saturday, calling on Gov. Jerry Brown to grant clemency to release nearly a dozen inmates they say are innocent.

Last year, the California Innocence Project of California Western School of Law submitted 12 cases for clemency. That number is now down to 11.

The organization was behind the release of Ventura resident Michael Hanline, who was locked up for 36 years before a judge overturned his murder conviction. It was the longest wrongful incarceration in California history.

"When I first got arrested, I figured at the most it would take a year, maybe two, to get straightened around, but 36, the system needs adjusting," Hanline said.

Officials say the cases have strong factual evidence of innocence like DNA, which freed Hanline.

Diana Gimenez is fighting for her husband Alan who has been behind bars for more than 20 years after being convicted in the death of their ill newborn daughter.

"It's very frustrating to have evidence, to have a whole medical community behind you, and the legal system is not listening to us," Gimenez said.

Kimberly Long's parents say they will never give up the fight to free their daughter, who was convicted of murdering her boyfriend. DNA evidence at the scene doesn't match Kimberly or the boyfriend. Her family is now praying for a Christmas miracle.

"It's a nightmare that you don't wake up from, it doesn't end, it just continues on and on," said Darlene Long, Kimberly's mom.

Officials say Gov. Brown traditionally issues clemency at Christmas and Easter. They're hoping this holiday 11 inmates will see their freedom.