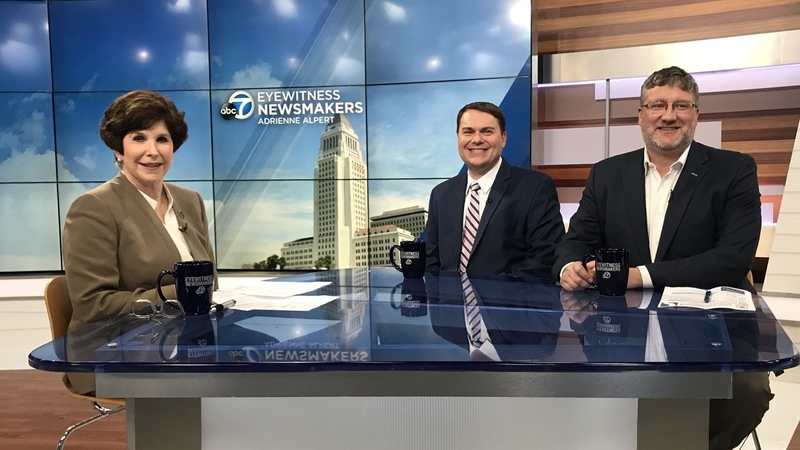 LOS ANGELES (KABC) -- This week's Eyewitness Newsmakers heard the pros and cons for California's Proposition 6 on the November ballot.

Give Voters a Voice's Carl DeMaio, who helped launch the tax repeal, and California Alliance for Jobs' Michael Quigley, who spoke against the repeal, joined Eyewitness Newsmakers to discuss Prop. 6.
DeMaio, referring to polls showing support for the proposition, said approval will be another California taxpayer revolt, like Prop. 13. He said politicians are wasting tax money they already have that should instead be spent on roads and bridges.

Quigley talked about the repeal as an attack on bridge and road safety. He said the repeal would stop funding for 6,500 projects underway in California, and said it would make congestion worse. Business mostly opposes Prop. 6 because the new tax and fees will generate more than half a million jobs.

In the November election, California voters will decide on 11 propositions. Here's everything you need to know about Prop 6. (Courtesy of CALmatters.org)

Both sides used the figure of about $700 as an example. DeMaio said that's what the new tax and fees will cost the average family annually. Quigley said it costs the average motorist about that much every year to repair damage caused by driving on the state's roads.

The Road Repair and Accountability Act of 2017, SB 1, also known as the state gas tax, was enacted April 2017.

In June, voters approved Proposition 69, which required the new money be spent on transportation-related purposes.
Opponents say the measure is meant to increase Republican turnout in November to help defend GOP-held congressional seats. Republican gubernatorial candidate John Cox is a vocal supporter who has contributed $250,000 to the campaign. Recent polls show strong support so far for the tax repeal.

Gov. Jerry Brown considers road and bridge repair and transportation part of his legacy, and is expected to defend the tax. He has a nearly $15 million war chest left over, which he could dip into to fight the initiative.

DeMaio called the tax a fraud.

"The fraud is known," DeMaio said. "They know we've been paying the second highest gas tax for years, and yet we have never gotten the road repairs."