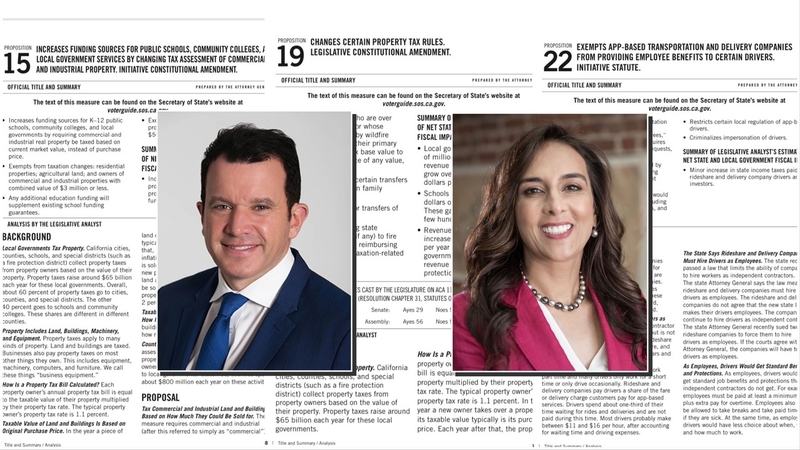 Three of the most contentious ballot propositions that will be put before California voters this election, Propositions 15, 19 and 22, were the focus of the latest edition of Eyewitness Newsmakers.

Prop. 15 asks voters to split the property tax rolls, allowing an increase in commercial and industrial property valued over $3 million.

Prop. 19 would limit property taxes on seniors, disabled and victims of disasters. It also would change rules on inherited property, while some of the money would be added to a disaster fund.

For decades, California property tax laws have remained the same, but Proposition 15 on the Nov. 3 ballot could change that.

Prop. 15 raises taxes on some commercial properties to fund schools and local services.

San Francisco trial lawyer and Republican committeewoman Harmeet Dhillon said taxes are already high and business will leave the state or pass the costs onto the consumer if the proposition passes.

"This is a tax increase; it's a massive tax increase," she said. "And the reason that it's phrased as a split roll is because it only affects part of the tax base so it doesn't affect residential properties. It affects commercial and industrial properties," Trevor Daley, a strategist and president of Cerrell, said.

"Right now in California we have an outdated system. People throughout the state are really looking for large companies and corporations to pay their fair share," said Daley. "It's going to be a tax on companies, larger than $3 million worth of property."

App users: For a better experience, click here to view the full guide in a new window

Dhillon and Daley expressed their differing opinion on Prop. 19 and whether it is a property tax savings.

"It makes the housing market more equitable for all. It really benefits victims that have been really impacted by the fires this year and in previous years. Also, it benefits seniors and those with disabilities," Daley said.

Ballot titles usually give voters some idea what the measure is about, but Proposition 19 is about so many things, it was given a vague title: Changes Certain Property Tax Rules.

The guests also disagreed on Prop. 22 and whether app-based drivers benefit in the gig economy by remaining independent. They addressed Uber, Lyft, and other rideshare companies, saying they will leave the state if their measure fails.

"Seventy percent of the drivers currently in California are working full time. So, it started out as a freelance, but now we need to have protections for those workers," Daley said, adding the app-based companies are too profitable. "I don't agree at all that they're going to go out of state."

But Dhillon said the apps were set up to work with independent contractors.

"These apps and their workers and those jobs are going to leave California altogether if this goes through," she said. "It is contrary to (the) way that they have set up the system that allows people a lot of freedom to do it in their spare time, to not have to worry about somebody setting their hours for them."