A new study has found that more women are becoming unemployed during the coronavirus pandemic than men.
KABC 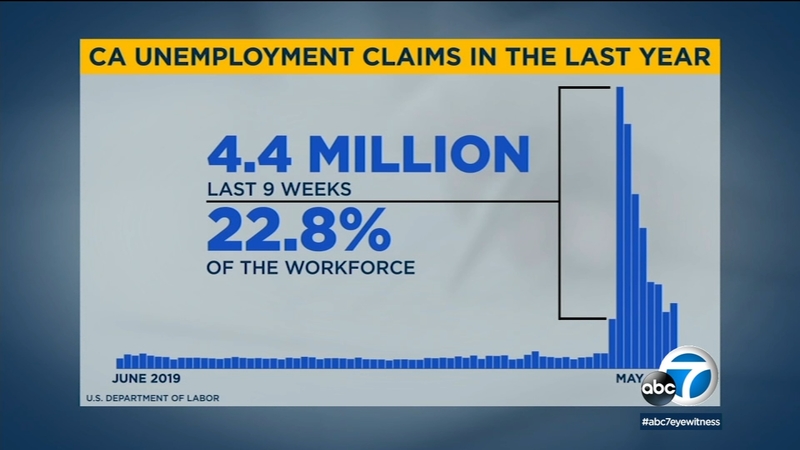 LOS ANGELES (KABC) -- COVID-19 has infected the nation's economy in a big way - but it's hit Southern California especially hard.

And a new study shows it's also affecting women in disproportionate numbers.

The number of people in California filing for unemployment continues to rise. With nearly 250,000 thousand added this week, the total since the pandemic began is at nearly 4.4 million claims statewide - nearly 23% of the workforce.

Among them: Nancy Camacho. She worked as a bartender and server at various private events.

"In March when all this started happening unfortunately I lost my hours," Camacho said. "And due to the stay at home order I have no more hours, no more work."

In April nationwide the unemployment rate for women was 15.5%, compared with 13% for men.

In the Los Angeles metro area, looking at industries that have suffered high job losses, such as retail - women hold more than half those jobs. More than 70% of healthcare workers are women. More than 65% in education.

"LA has been hit much harder than most of the rest of the country," said Arie Kapteyn, executive director of USC's Dornsife Center for Economic and Social Research

A new study by University of Southern California researchers found people living in Los Angeles are worse off financially that the national average for a few reasons, including the high cost of housing.

"The other thing is Los Angeles has a very large part of the labor force working in, for example, the entertainment industry and generally in the service sector and that's the sector that's been hit hardest of all nationwide," Kapteyn said.

As for the stimulus checks, he says they're helpful, but not enough.