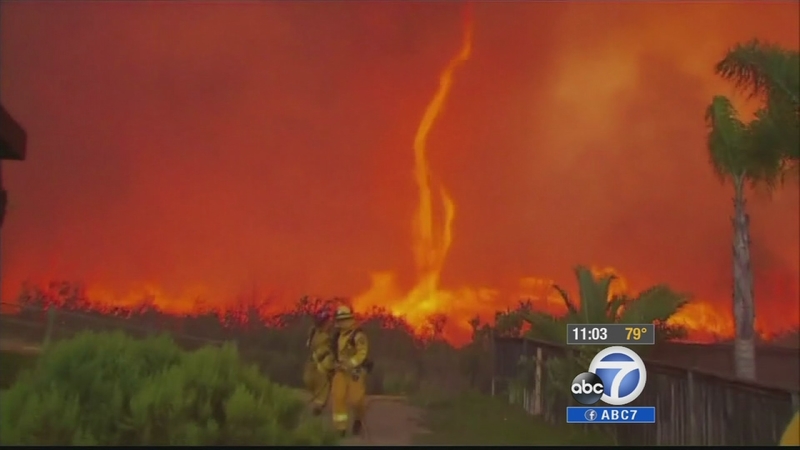 SAN DIEGO, Calif. (KABC) -- The first death has been reported in connection to the fires burning in San Diego County. Firefighters on Thursday said they found a badly burned body at a transient encampment during a hot spot check in Carlsbad.

The body was discovered in the area of Ambrosia Lane and Calliandra Road. Fire officials say the investigation is ongoing.

Eight of the nine fires in San Diego County have a suspicious ignition point. The fires were not started normally, sources told ABC affiliate KGTV.

On Thursday night, Escondido police arrested two arson suspects, but they do not appear to be related to the large wildfires. Isaiah Silva, 19, and an unidentified 17-year-old were arrested on suspicion of setting two small unrelated fires in the Escondido area, according to KGTV. One of the fires was set in Kit Carson Park and another small fire was set nearby that was quickly put out. Police say they are "not prepared to connect" the two suspects to any of the larger fires across the county.

In total, the brush fires have burned more than 9,000 acres in hot and dry conditions, causing more evacuations and power outages.

The San Diego County Sheriff's Department expanded mandatory evacuations for residents near the "Cocos Fire," which broke out in the city of San Marcos.

Residents from the areas of Questhaven, Harmony Grove and parts of Elfin Forest in San Marcos and neighboring unincorporated areas were asked to evacuate.

The fire has grown to about 1,200 acres and was 10 percent contained as of 6:30 p.m. Thursday. Three homes were destroyed, CAL FIRE officials said.

San Diego County declared a local emergency on Wednesday for the nine fires throughout the area. 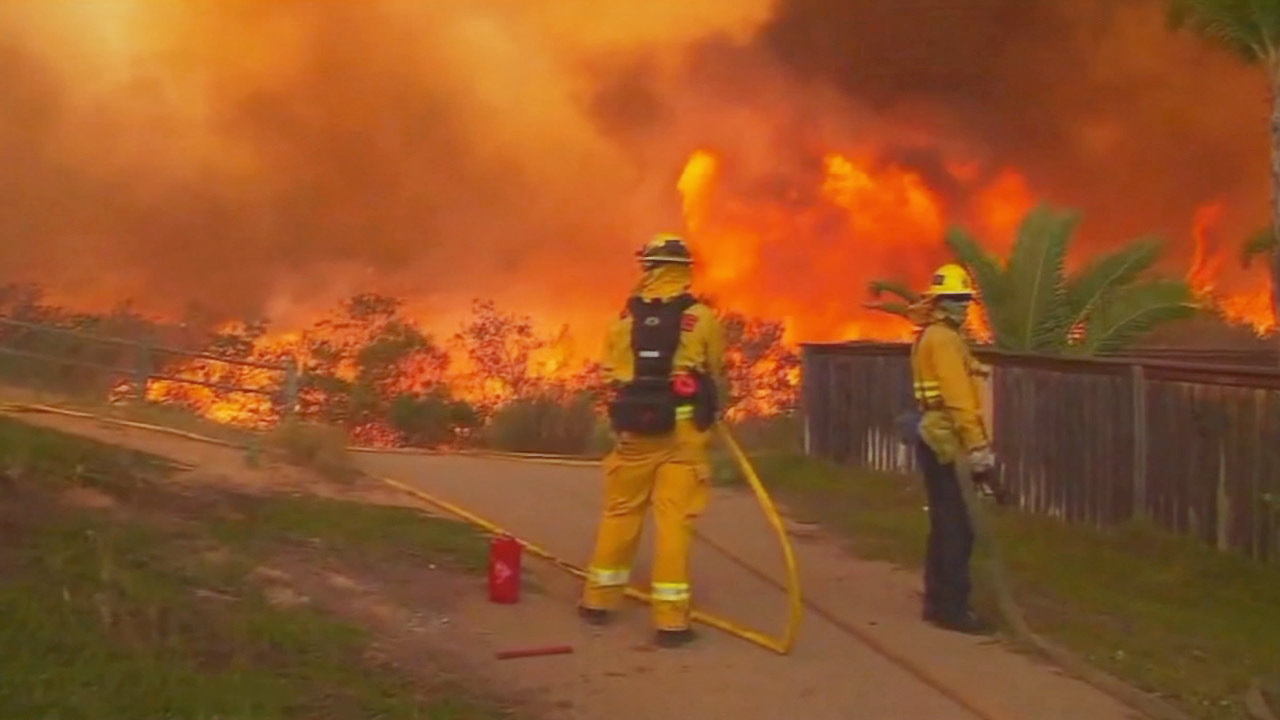 Several buildings and homes were destroyed as a 400-acre fire devoured parts of the city of Carlsbad.

The "Poinsettia Fire" erupted in the area of Poinsettia Lane and Alicante Road at about 10:30 a.m. Wednesday. It was 60 percent contained on Thursday morning.

Evacuation orders were lifted Thursday evening for all areas associated with the Poinsettia Fire. More than 15,000 homes and business were ordered to evacuate on Wednesday.

Commercial vehicles, an outbuilding and two vehicles were also damaged in the fire. Large power outages were also reported.

Anyone with information about the origin of the fire or suspicious activity or persons who may be involved with starting the fires should call (760) 602-7599 or email PoinsettiaFire@carlsbadca.gov.

Just north of Carlsbad, the "Tomahawk Fire" that broke out on Naval Weapons Station Fallbrook and spread to Camp Pendleton has burned about 6,300 acres and was at 15 percent containment.

Officials said Thursday afternoon that the Tomahawk Fire has grown past the containment line and was approaching the city of Fallbrook. An evacuation order was issued for Olive Hill Road in Fallbrook between Ladera Vista Road and South Mission Road.

Meantime, another fire broke out at 3:15 p.m. Thursday in the Las Pulgas area. The blaze has grown to 4,000 acres and is moving southwest.

The naval station's gates were expected to be closed and traffic into Camp Pendleton stopped on Thursday.