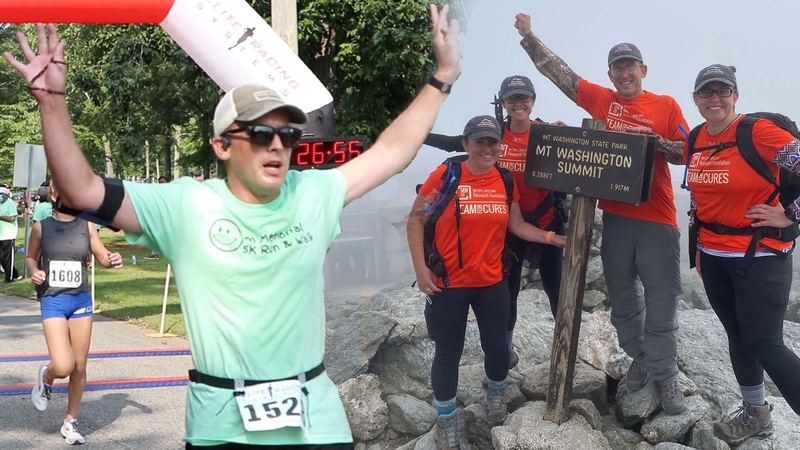 MONROE TOWNSHIP, New Jersey -- "First time doctor says you have cancer, you think it ain't going to be good, but I do believe that if we search hard enough, we can find good in it," said Artie Bifulco. "If I'm being honest, I want this cancer out. But I don't want to go back to the way I was."

Artie, 42, had been experiencing persistent pain in his back. Soon enough, he was diagnosed with multiple myeloma, a cancer of plasma cells. He could hardly walk, run, and pick up his three children.

Following surgery and treatment, Artie started a path to recovery. Three years later, he can do all of those things - and better.

"I never run 5Ks," he said. "But as it turned out, God brought me back so I can continue to get stronger."

He decided to take a swing at the 4th Annual Om Memorial 5K run and one-mile walk. It's a cause his family has supported throughout the years.

"Some of the best medicine you can take for yourself is to show up for somebody else," said Artie, "And this family lost their son a few years ago to cancer. He was battling a brain tumor."

13-year-old Om Parikh was known for his everlasting smile and positive attitude during his three-year bout with oligodendroglioma. His family established the Om Foundation to keep his optimism alive.

"We are fortunate that even though he was only a 13-year-old life, he gave us enough for us to survive the rest of our life," said Ketul Parikh, Om's father.

The Bifulco family has walked for Om together in the past, but Artie has never been able to run the 5k race. In fact, a friend had discouraged him from attempting the hilly course located at Thompson Park. But that gave Artie all the more reason to cross the finish line.

"It sort of eats at me. It drives me a little bit," he said.

And so, he ran with flying colors. Artie finished the five-kilometer trek in less than 27 minutes.

"I owe it to God because I didn't do this stuff before," he said. "I don't think it's a coincidence that I can do it now and do it at a level that I never even dreamed of."

Artie and his family are guided by their faith, which is leading them on a pilgrimage much greater than just a walk in the park.

"Literally, it's not the only uphill battle we have this week," he said. "We're doing something a little on the insane side. We're climbing Mount Washington to support the Multiple Myeloma Research Foundation."

Towering over the state of New Hampshire, the 6,288.2 ft mountain is the tallest peak in the northeastern U.S. Their trip was originally planned through Moving Mountains for Multiple Myeloma, a collaboration between the Multiple Myeloma Research Foundation (MMRF) and CURE Media Group. However, the group hike was canceled due to an abundance of caution surrounding the COVID-19 pandemic.

Still, this setback is not stopping the Bifulco family from making the climb alone.

"I'll be there with my sisters and my wife, a core group of people that helped me recover," said Artie. "One of the reasons I want to go is to thank God and to say, hey, I've heard the call. I'm changing. I'm coming up to you. Come down to me. Make me better than I was."