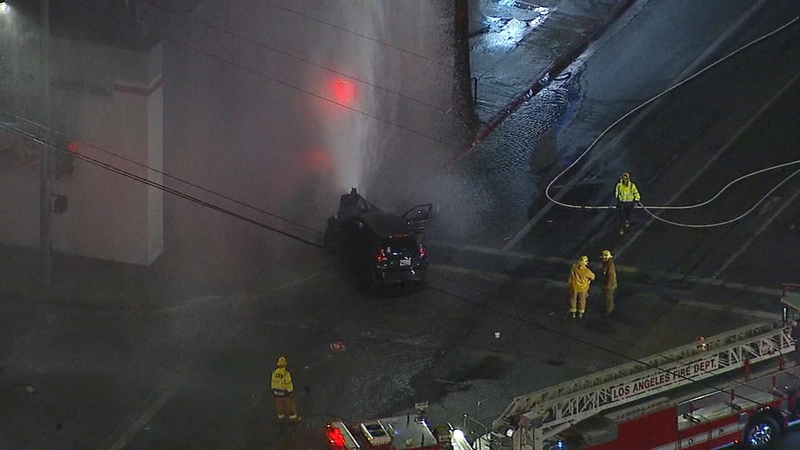 CANOGA PARK, LOS ANGELES (KABC) -- A car crashed into a fire hydrant at an intersection in Canoga Park, leaving nine people injured and sending streams of water from the sheared hydrant into the street Sunday evening.

The crash occurred near the intersection of De Soto Avenue and Sherman Way at about 9:15 p.m.

Footage from AIR7 HD showed firefighters attempting to turn off the water from the sheared hydrant as the water went flying into the air and damaged a nearby shoe store. The geyser hit power lines and water piled on top of the roof of the building.

The water led to structural damage of the Warehouse Shoe Sale store, including a roof collapse, according to the Los Angeles Fire Department.

There were customers and employees inside the building when the incident occurred.

The nine people injured were transported to hospitals. One person suffered a broken leg, but none of the injuries were considered life-threatening, according to Los Angeles police.

Police said the car slammed into the fire hydrant after being hit by another vehicle, which was spotted with significant front-end damage near the scene. One of the drivers was arrested on suspicion of DUI.

Firefighters were later able to stop water from flowing.

In the aftermath of the incident, debris and shoes were scattered in the parking lot of the building.