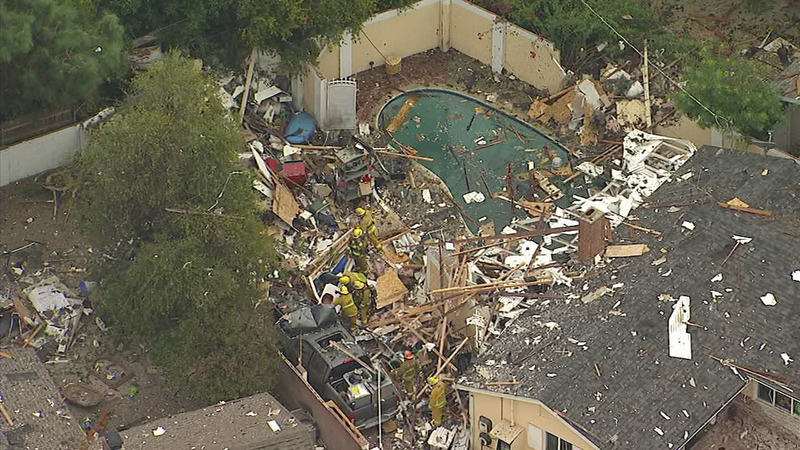 CANOGA PARK, Calif. (KABC) -- An explosion at a home in West Hills on Wednesday significantly damaged the structure and scattered debris across a residential block, prompting a response from firefighters and police.

Two people were inside the single-story house, in the 7500 block of Sale Avenue, when the blast happened shortly after 3 p.m. No active fire occurred and no one was injured, according to the Los Angeles Fire Department.

Paramedics evaluated three young children at the scene. It was unclear if those children were at the day care center located next door to the damaged house.

"We heard this giant, like, boom," said neighbor Jordan C'Dealva-Lenik. "At first, we thought it was the big one and we were really scared. So me and my mother, we ran out of the house because we didn't know. The whole house was shaking. We didn't feel any more tremors after that, so we said, OK, it's not an earthquake."

Southern California Gas Company officials and firefighters from three fire companies ensured that utilities were shut down at the location as a precaution, officials said.

The explosion left the house's backyard and surrounding areas covered with splintered wood beams, plywood, appliances and bricks. A pickup truck with a mangled hood was seen parked alongside the residence.

Officials from L.A.'s Department of Building and Safety were evaluating multiple structures at the blast site. Six homes were yellow-tagged due to damage.

Residents behind the house began cleaning up debris that flew into their homes. One woman had all the windows in her house blown out.

"She as extremely upset. She was crying. She said the house across the street exploded," Harvey Aingworth said of his sister's home. "The fire department picking the pieces out of the tree was pretty amazing. That it blew up that high that it got into a tree."

The cause of the incident was unknown, but Los Angeles police believe it could have been a natural gas leak.

Neighbors said they weren't surprised it could be a leak.

"We would get a smell of kind of like propane or natural gas," neighbor Cindy Smith said. "I'm hearing other neighbors say they also smelled something so I think we should have been more proactive and gotten more phone calls to the authorities to investigate it more."

She and another neighbor had called 911 earlier this summer. She said firefighters came out to check, but were not able to get on the property.