AP
By JONATHAN DREW
WASHINGTON -- A Delaware man photographed carrying a Confederate battle flag during a deadly riot at the U.S. Capitol was arrested Thursday after authorities used the image to help identify him, federal prosecutors said.

A news release from the U.S. Attorney's Office for the District of Columbia said that Kevin Seefried, who was seen carrying the flag, was arrested in Delaware along with his son, Hunter Seefried. 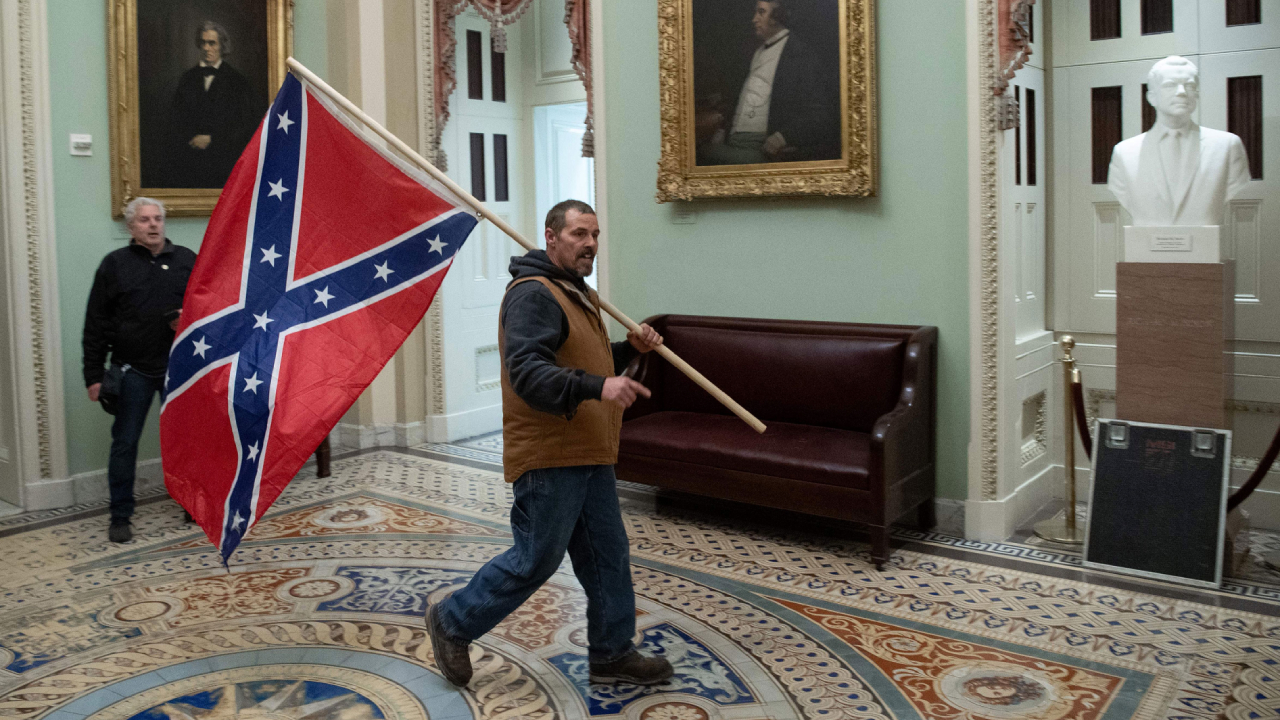 The FBI wants the public's help to identify the man seen in photos, widely circulated online, carrying a large Confederate flag inside the US Capitol on Jan.6.

Prosecutors said both entered the Senate Building through a broken window before Kevin Seefried was seen carrying around the Confederate flag in photos that caught attention from news outlets and social media.

Both were charged with unlawfully entering a restricted building, violent entry and disorderly conduct on Capitol grounds and degradation of government property.

They were part of a larger group that verbally confronted members of the Capitol police over a 15-minute span and were documented on surveillance video, according to court documents written by an FBI special agent.

The men were identified after the FBI was told by a coworker of Hunter Seefried that he had bragged about being in the capitol with his father, court documents say. The FBI agent wrote that authorities compared Kevin Seefried's driver's license photo to images of him carrying the flag during the riot to confirm his identity.

Robert Sanford, a retired firefighter from Pennsylvania, has been arrested, accused of being the man seen on video throwing a fire extinguisher that hit three police officers at th

They both spoke voluntarily to the FBI on Tuesday and admitted they had been present at the riot, according to court documents.

"Kevin Seefried also explained that he brought the Confederate Battle flag seen in Exhibit A to the District of Columbia from his home in Delaware where it is usually displayed outside," the agent wrote.

Information on whether the men have attorneys who can speak for them couldn't immediately be found in electronic court records. A phone listing for the two men in Delaware rang unanswered Thursday afternoon.
President Donald Trump's supporters stormed the U.S. Capitol building last week after a rally the president held to repeat baseless election grievances. Five people died during the siege, including a Capitol police officer, a woman shot by police and three people who had medical emergencies.

Fact check: No, impeachment itself would not ban Trump from a 2024 presidential run
EMBED More News Videos

Elizabeth Schulze reports on the situation in Washington, DC.