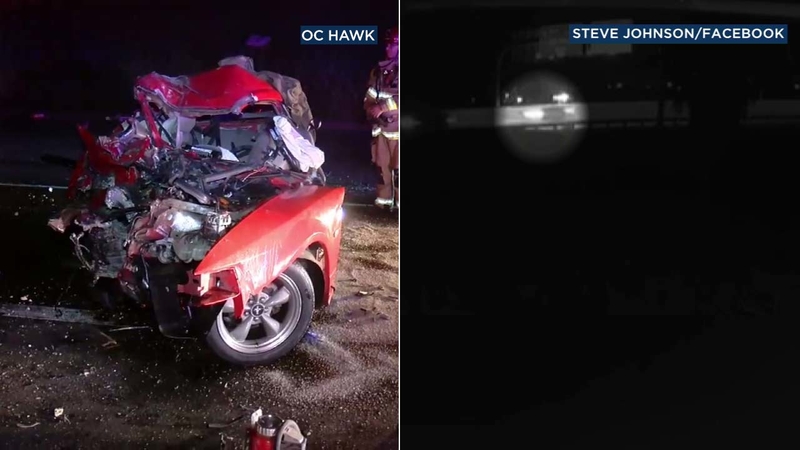 RIVERSIDE, Calif. (KABC) -- Shocking video shows the moments leading up to a deadly wrong-way crash in the heart of Riverside.

The footage shows a Mustang going against traffic on the 60 Freeway just before it slammed into an SUV early Sunday morning.

The driver of a red Ford Mustang entered the eastbound 60 Freeway heading westbound before slamming into a black Dodge Caravan near the Main Street exit around 3:30 a.m.

The woman behind the wheel of the Mustang drove on the wrong side for 7 miles before crashing near the Main Street exit.

A passenger in the Dodge Caravan was killed. The drivers of both vehicles were seriously injured and taken to the hospital.

The driver of the Caravan, who has since been released from the hospital, told ABC7 about the crash that killed his best friend Jehan Mapatuna.

Alazar Omari says they had just finished celebrating Jehan's birthday. He offered to drive his friend home after he had a few celebratory drinks.

Ironically, CHP investigators say the woman who was driving the car that crashed into them was under the influence.

While Omari is not at fault, he is blaming himself.

Omari says his friend was recently accepted to UCLA to study math and physics.

"He just loved to smile and have fun and make people laugh," he said.

Police say when the driver of the Mustang is released from the hospital, she will be arrested for DUI.