1 killed after car flips, slams into side of building in Pico-Robertson 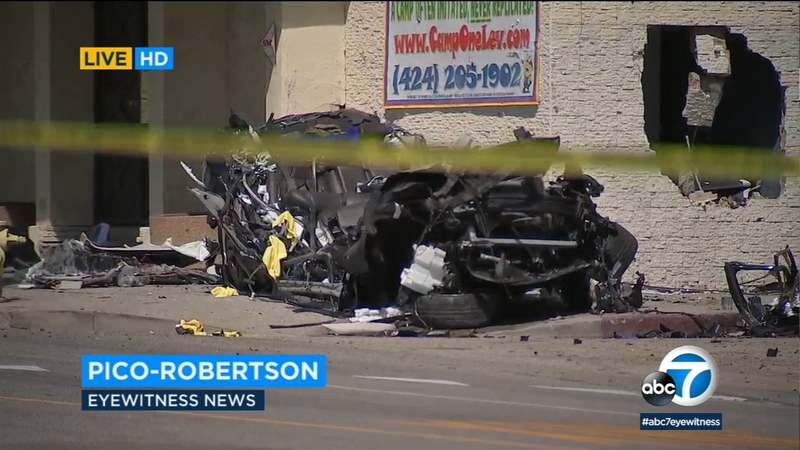 1 killed after car flips, slams into side of building in Pico-Robertson

PICO-ROBERTSON, LOS ANGELES (KABC) -- A person was killed in a violent crash that obliterated the vehicle and left a gaping hole in the side of a building in the Pico-Robertson neighborhood of Los Angeles Thursday morning.

The collision happened in the 8900 block of West Pico Boulevard just before 6 a.m., officials said.

AIR7 HD was over the crash, where several fire trucks, firefighters and police officers responded to the scene. First responders attempted to treat the male driver, who later succumbed to his injuries, officials said.

The car, later determined to be a late-model Infiniti, was badly mangled - with large chunks of the vehicle scattered across the sidewalk and streets. The car's bumper and part of a door were seen several feet from the point of impact.

"My common sense tells me it was a violent crash, but from the debris field, I can't tell how fast somebody may have been going," Lonnie Tiano with LAPD said. "The car is not in very good shape. It was difficult for me to even determine it was an Infiniti. We had to get that from the plate of the car - the plate on the inside of the car, not the license plate."

Part of West Pico Boulevard was closed while crews worked to clear the scene.