ByCarlos Granda and Marc Cota-Robles via

A man whose body was found in a vehicle buried in six feet of mud in Palmdale on Tuesday following last week's severe flooding has been identified.

PALMDALE, Calif. (KABC) -- A man whose body was found in a vehicle buried in six feet of mud in Palmdale on Tuesday following last week's severe flooding has been identified.

The body of Robert Michael Rasmussen, 49, of Palmdale was found by crews working to clear the road near Karen Drive and Avenue M-8.

His vehicle was found upside down and tilted sideways in a retention basin.

"It must have happened so quick that he couldn't do anything because they said that he still had his seat belt on," said Virginia Driscoll, Rasmussen's mother.

The Los Angeles County Sheriff's Department said it was too dangerous for fire crews to try and rescue the buried vehicle on Thursday and that no one had reported the driver missing.

Driscoll admits that there may have been miscommunication as to why her son wasn't reported missing.

She says Rasmussen was house-sitting for her last week, while she was visiting Israel. He was only two blocks away from her home when his vehicle was swept under the mud.

AIR7 HD happened to be over the very spot in Palmdale on Thursday as flash flooding trapped drivers. At that point, Rasmussen's vehicle was not visible.

Donna, who was a passenger in a red car, witnessed a dark van float for about five minutes and then sink into the debris flow.

"When we called 911, we told them that a car had gone over and that he was under the water," Donna said.

Meanwhile, Purtee says search and rescuers responded appropriately to Donna's report and "did the best they could do under these emergency conditions."

Search crews used 3-foot-long metal poles to probe the mud for any signs of a buried vehicle, but Rasmussen's van was buried by about six feet of mud.

"They probed the area, walked up and down thinking that maybe the car had washed further down," said Purtee.

"There were actually two other vehicles that were actually behind that vehicle. Those vehicles didn't quite make it into that catch basin. That basin is 12 feet deep. There was probably six feet from the actual top of the mud line before there was any evidence," said Lt. Victor Lewandowski with the sheriff's department.

Driscoll fought back tears while visiting the scene with Rasmussen's 24-year-old son.

"If you have an eyewitness saying, you know, 'we saw something', you need to check," she said.

Driscoll said there's only one thing helping her get through this nightmare.

"Everybody has a certain amount of time here, and apparently this was his time to go," she said. "I'll miss him very much." 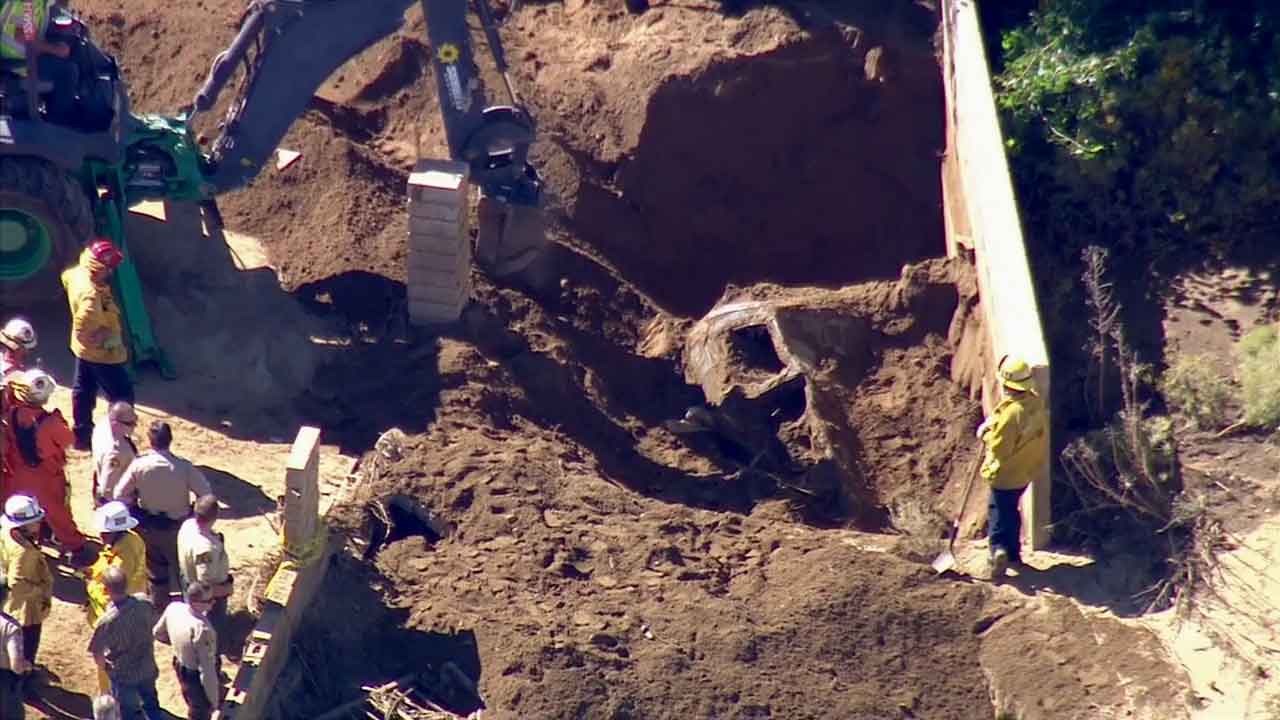