LA training program sends its students from prison to the kitchen 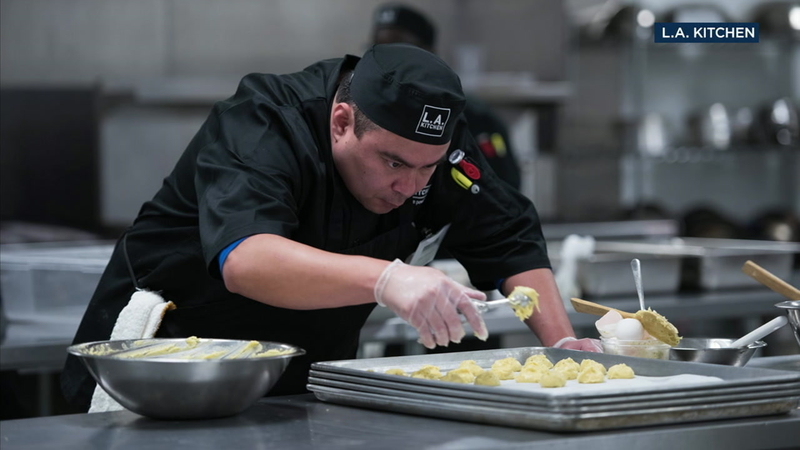 LA training program sends its students from prison to the kitchen

LOS ANGELES (KABC) -- Christopher Smith battled substance abuse and got into trouble with the law, serving time in state prison.

"I just want to cut meat, cows, things like that for a supermarket," said Smith.

Smith already has two jobs lined up and plans to enroll in additional training to get his butcher license.

"LA kitchen has given me a new way of thinking. Not just from the culinary standpoint, but personal standpoint. I'm able to complete things that I start. This gave me the extra, the will to push on. Drugs and that type of stuff is not an option for me anymore," said Smith.

Graduate Jona Girlado, who also served time in prison, said "I never thought I would accomplish anything so it helped me a lot. It allowed me to be patient, more accountable."

The 21 students in this graduating class were either formerly incarcerated, homeless, or ex-foster care. Their culinary training is paired with life skills support.

"Two-hundred men and women go through the program. That means that those men and women are earning about $5 million annually vs. going back to prison. And that includes about $250,000 in payroll taxes so LA Kitchen has earned its way into this city," said Robert Egger, the CEO of LA Kitchen.

This was LA Kitchen's 15th graduation. Students team up with volunteers to make healthy meals for those in need. But the nonprofit announced last week that the launch of the 16th class is on hold.

"Sometimes like a family, you gotta make decisions. you gotta cut HBO every once in a while. What we had to do is say stop and say look, the training program, the food program, we have to pull back down so we can rise back up," said Egger.