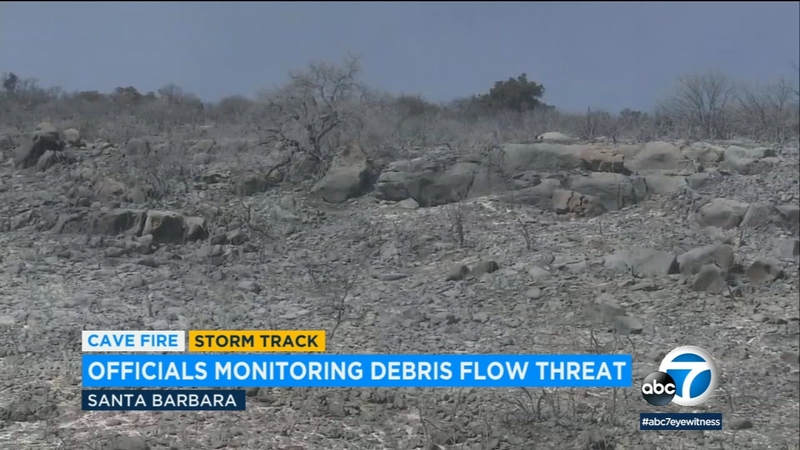 SANTA BARBARA, Calif. (KABC) -- A strong storm moved into Southern California on Wednesday, almost completely dousing a wildfire that had threatened thousands of homes, but the heavy downpour posed a potential new threat of debris flows from barren slopes.

The blaze, dubbed the Cave Fire, scorched 4,367 acres in the Santa Barbara region with 20% containment by Wednesday morning. The fast-moving inferno was fanned by erratic winds, threatening 2,400 homes and forcing about 5,500 people to flee.

Firefighters prevented any homes from being lost and most evacuees were allowed to return home Tuesday afternoon.

Residents in and below the fire area on the south Santa Barbara County coast were issued a warning late Tuesday to be prepared to evacuate if necessary, but the first round of precipitation passed without problems.

Up to an inch of rain fell before dawn on the fire-scarred Santa Ynez Mountains above the cities of Santa Barbara and Goleta, but it occurred over a number of hours, said Santa Barbara County Fire Department spokesman Mike Eliason.

The Santa Barbara County Sheriff's Office issued a debris flow evacuation warning for the area between Patterson Avenue/Anderson Lane and Ontare Road, between the 3300 and 3500 block of State Street, Las Positas Road and south of East Camino Cielo to the ocean.

In Goleta, the warning area includes the area near Maria Ygnacio Creek and Patterson Avenue, south of the 101 Freeway.

Eliason said the size of the blaze remained at just under 7 square miles (18 square kilometers) and was technically only 10% surrounded "but for the most part the fire is pretty well taken care of and pretty well put to bed."

Crews will have to climb slopes to extinguish remaining "stubborn smokes" but remaining evacuation areas were to be repopulated in the afternoon and firefighters from other jurisdictions were being released.

"Hopefully we'll have everybody home in time for Thanksgiving," Eliason said.

Another storm predicted to arrive overnight was expected to drop snow at the top of the fire area.

"You really don't get to say that very often in California," he said.