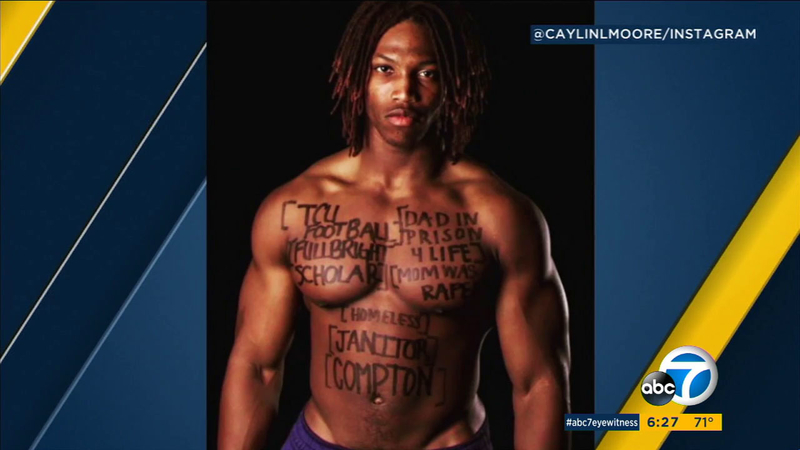 LOS ANGELES (KABC) -- A young man who grew up with a rough life in Compton is now heading to Oxford on a prestigious Rhodes scholarship, and telling his story to the world in a speaking tour and book.

Caylin Moore once wrote his life story on his chest for a school project. It reads: "Dad in prison 4 life. Mom was raped. Homeless. Janitor. Compton. TCU Football. Fullbright Scholar."

And now he can add Rhodes scholar to that list as well.

The Rhodes Scholarship is considered one of the world's most prestigious, allowing recipients to study at the University of Oxford. Only 32 students from the United States are chosen every year.

Moore grew up in Compton. His father was sent to prison for a murder conviction.

"It was a little rough growing up in a gang-infested environment where education is not necessarily valuable," Moore said.

He credits his mother for his interest in education, putting books in his hands at an early age. Her standard, he said, was not "if" he goes to college, but which graduate school he would attend.

"I wanted to let them know that even though we live in a particular area, we don't have to carry the weight of that burden around with us at all times," his mother, CeJai Moore said.

Moore first found academic and athletic success at Verbum Dei High School where 100 percent of kids are accepted into college.

His mother joined the coaching staff at the Watts-area private school, as Caylin became the star quarterback.

He would later play football at Marist College and then transfer to Texas Christian University, playing safety for the Division I school.

"I developed a mindset one day that I was going to be the best janitor that ever lived," he recalled. "If anyone came past the spot I was at on the Marist College campus, they would know that Caylin Lewis Moore was there because it was spotless."

He put in a similar work ethic in the gym and other endeavors he tackled.

The hard work paid off, first earning a Fulbright scholarship and now a Rhodes scholarship.

As he prepares for Oxford, he's also speaking to kids around the country, and working on a book he calls "It Won't Make Sense On Paper."