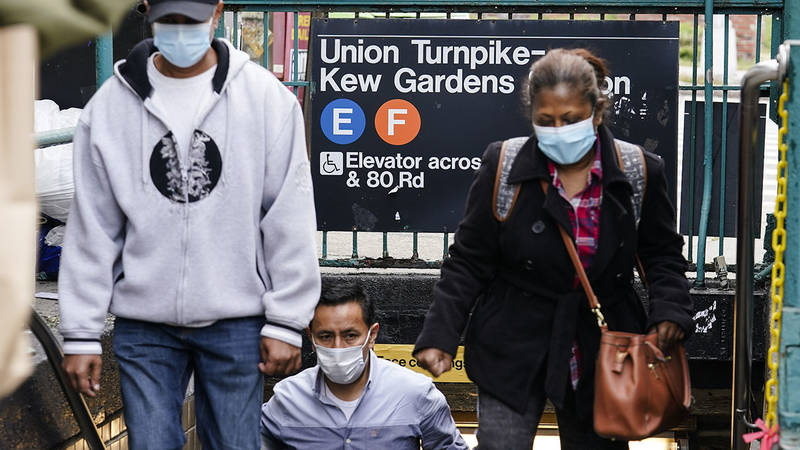 WASHINGTON -- To slow the spread of COVID-19, the US Centers for Disease Control and Prevention issued late Friday an order that will require people to wear a face mask while using any form of public transportation, including buses, trains, taxis, airplanes, boats, subways or rideshare vehicles while traveling into, within and out of the US.

The coverings must be worn over both the nose and mouth while waiting, boarding, traveling and disembarking, it said. The masks need to be at least two or more layers of breathable fabric and needs to be secured to the head with ties, ear loops or elastic bands, according to the order.

The CDC said it reserves the right to enforce the order through criminal penalties, but it "strongly encourages and anticipates widespread voluntary compliance" and expects support from other federal agencies to implement the order.

As the US death toll from Covid-19 tops 436,000 people, the Biden administration has already called for 100 days of mask usage as well as an increase in the allotment of vaccine doses for each state by 16% in hopes of managing the impacts of the virus that has made January the deadliest month of the pandemic.

Dr. Anthony Fauci, President Joe Biden's chief medical adviser, discusses the latest on the battle against the coronavirus, including an update on the emerging strains from the U.K. and South Africa.

And though vaccines are making their way to the public, health experts say the nation faces many more months of the pandemic, and the spread of variants has raised alarm.

More than 400 cases of a coronavirus variant first identified in the UK have been reported across the US, and health experts say new strains like it could soon become dominant.

At least 434 cases of the variant were detected across 30 states, the CDC said Wednesday -- that number is more than 100 more than the cases reported just days before.

The UK variant as well as another first identified in South Africa have worried officials and experts because they are more easily transmitted than the strain the US has been fighting so far. And as leaders race to get Americans vaccinated, they say the newer strains could spread quickly.

"The projection that is made with regard to the UK (variant) is that probably by the end of March, the beginning of April, it actually will become more dominant in this country," Dr. Anthony Fauci, director of the National Institute of Allergy and Infectious Diseases, said during a White House news briefing on Friday.

"The fact is, when you have a virus that has ability to transmit more efficiently than the wild type in the community, sooner or later by pure viral dynamics itself, it will become more dominant than the wild type," Fauci said.

The variants are likely to worsen the spread of coronavirus and add to the death toll, the Institute for Health Metrics and Evaluation at the University of Washington forecast Thursday.

To get a handle on the spread of the virus requires closing the gap between the number of available vaccine doses and those that have been administered, according to experts.

Experts say they expect existing vaccines to be protective against new strains of the virus, but that the nature of the South African originating strain may make them less effective, adding another hurdle to the efforts to bring a sense of normalcy back to life in the US.

But officials have also said that they anticipate the production of new boosters or vaccines will have fast turnarounds, thanks to systems already in place.

Biotechnology company Novavax said it is developing a booster to protect against newly emerging strains.

On Thursday, the company announced its vaccine, known as NVX-CoV2373, was found to have an efficacy of 89.3% in a Phase 3 clinical trial conducted in the UK and the vaccine appeared to demonstrate clinical efficacy against some variants of the coronavirus.

In January, Novavax started developing boosters for the newer variants, and expects to select its ideal candidates in "the coming days."

"The company plans to initiate clinical testing of these new vaccines in the second quarter of this year," Novavax said.