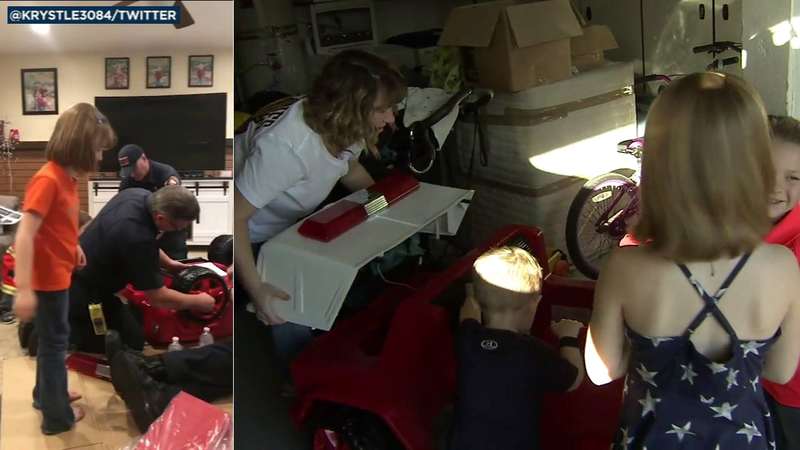 CERRITOS, Calif. (KABC) -- The government shutdown is affecting hundreds of thousands of families, including a family in Cerritos.

Krystle Murray's husband serves in the U.S. Coast Guard and hasn't been paid in more than a month.

"It's just really scary not knowing when he is going to get his paycheck. That's the worst part about it," Murray said.

It's been a rough start to the year for the family, so relatives sent over a gift - a mini fire truck for little Camden, his big brother Mason and their sister Hailey.

This week, Los Angeles County firefighters at Station 30 got a unique request. They got a call from Murray's stepfather, who asked them to build the firetruck.

So the firefighters took time out of their day to thank a family that's sacrificing in more ways than one. They arrived on Wednesday afternoon, to the surprise of the Murray kids.

"We see a fire truck and I'm worried that there's a fire down the street," 6-year-old Mason said.

Hailey, 9, said they were able to lend a hand.

"I didn't even know it was really a surprise. They let us help them build it," she said.

The firefighters spent two hours building the truck that day.

"I couldn't believe that they would actually take time out of their schedule to come and put something like that together for them," Murray said.

It's a small gesture, but in these tough times for the Murray family, it means everything.