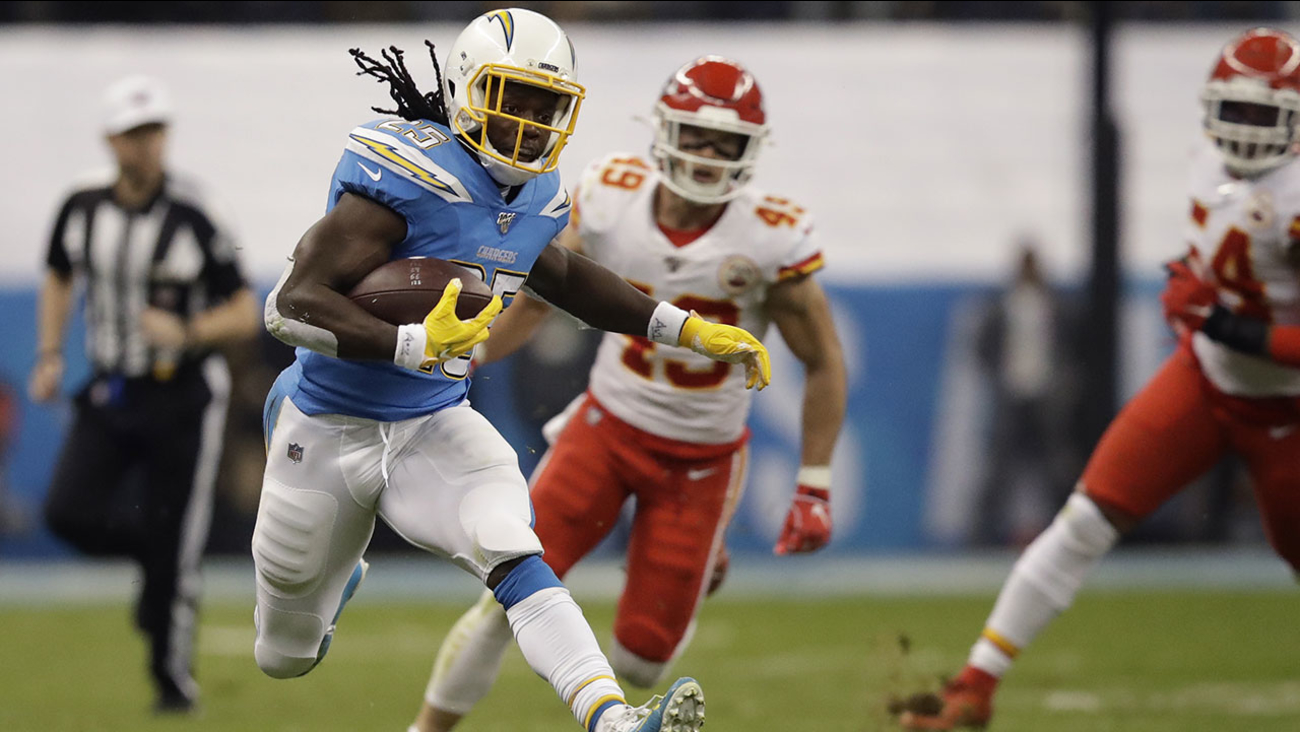 Los Angeles Chargers running back Melvin Gordon runs upfield during the first half of the game against the Kansas City Chiefs, Monday, Nov. 18, 2019, in Mexico City. (AP Photo/Marcio Jose Sanchez)

The Chargers were 4-6 heading into the game and needed the victory against the AFC West leader to have any hopes of making consecutive postseason appearances for the first time since 2009.

But Philip Rivers struggled, throwing four interceptions - including one as the team was on a potential game tying or winning drive at the end.

Patrick Mahomes had led the Chiefs to a 24-9 lead by the third quarter but a touchdown pass from Rivers to Keenen Allen and a two-point conversion had put the game within reach.

But Rivers threw his fourth interception of the night when Chiefs safety Daniel Sorensen leaped up and plucked the ball from the air in the end zone.

Attendance was more than 76,000 at Mexico City's Estadio Azteca, a stark change from the 27,000-seat stadium where the Bolts are used to playing their home games.

If you guessed 76,252 at this game in #MexicoCity you’re EXACTLY correct!
#abc7eyewitness pic.twitter.com/rmI3BxLbIL

Last year turf problems at the stadium forced the Rams-Chiefs game to be moved back to Los Angeles at the last minute.

Few of those issues were evident Monday night.

The hybrid turf that never quite took in Azteca has been swapped out for natural grass. Women's soccer league matches were moved to a different venue, and fewer events in general have been scheduled for the 84,000-seat Azteca. Last year, concerts in the days leading up to the scheduled game between the Chiefs and the Los Angeles Rams contributed to the ragged field conditions.

This year, the most recent soccer game in Azteca took place Nov. 2, giving groundskeepers time to ensure the field is tip-top.

Although the teams spent less than 48 hours in Mexico's capital city, the NFL has deep roots among fans around the country. Commissioner Roger Goodell met Monday with Mexican President Andrés Manuel López Obrador while the league and the federal government are considering extending the Mexico game series beyond its current deal through 2021.

The game was particularly special to Chargers cornerback Michael Davis, the son of a U.S. immigrant from Mexico City. Davis got to play in front of his grandparents for the first time.

It was the Chargers' first visit to Mexico. The league's local office says the team has a strong following - mostly in Tijuana just across the border from San Diego, which the Chargers long called home before moving to Los Angeles after the 2016 season.

Los Angeles split its games against Kansas City last season and faces the Chiefs twice in the final six games. They will meet in Kansas City in Week 17.

"We have to find a way to beat Kansas City," Rivers said before the game. "You have to go one at a time, but certainly I'm a fan of looking at the big-picture perspective."

The Chiefs, now 7-4, also needed the win after dropping four of their last six, and with Oakland suddenly challenging for the AFC West lead.

The push to keep playing games in Mexico is no accident. While soccer remains king, the NFL estimates there are some 25 million fans of football in the country. Many people get together in homes, bars and movie theaters to watch live broadcasts, and it's common to see fans wearing jerseys of their favorite teams. Players with the Steelers, Cowboys, Patriots and 49ers are among the most popular, dating to the teams' individual periods of dominance.