3 suspects in custody in Downey after wild chase in Southland 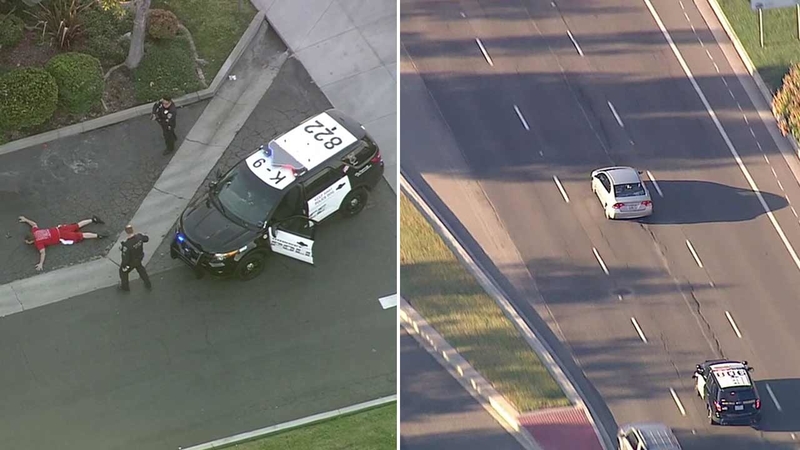 3 suspects in custody in Downey after wild chase in Southland

DOWNEY, Calif. (KABC) -- Three suspects were taken into custody after a driver suspected of mail theft led Orange County sheriff's deputies on a chase throughout the Southland Friday afternoon.

The chase began along the northbound 5 Freeway in Laguna Hills around 2:30 p.m. and ended two hours later near the corner of Lakewood Boulevard and Florence Avenue in Downey.

The male driver, along with two other passengers in a silver Honda Civic sedan, drove along freeways and surface streets through red lights, around traffic and on wrong sides of roads from Orange to Los Angeles counties.

The chase came to an end when the driver and passengers got out of the vehicle and tried to flee on foot. A deputy patrol car moved in front of the driver and the suspect proceeded to put his hands up. The two passengers in the car were also arrested.

The suspect drove at slow and high speeds through multiple cities in Orange County, including Mission Viejo, San Clemente and Santa Ana.

At one point, the driver was driving dangerously near Disneyland in Anaheim.

Deputies attempted the PIT maneuver multiple times but did not work as the vehicle dangerously traveled through crowded streets near the theme park.

During an attempted PIT maneuver in Norwalk, one Orange County Sheriff's Department SUV slightly missed the Honda Civic and crashed onto a sidewalk as the suspect vehicle continued fleeing.