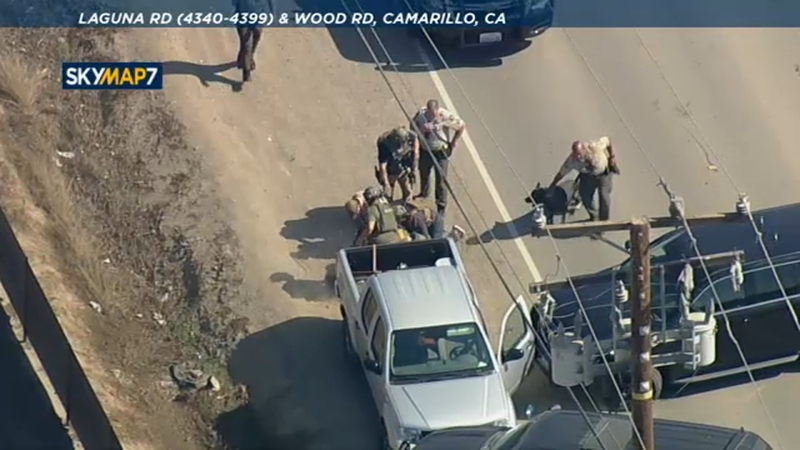 THOUSAND OAKS, Calif. (KABC) -- A man wanted on suspicion of assault with a deadly weapon was taken into custody Tuesday afternoon in Camarillo after a police chase that began in Oxnard was interrupted by a 30-minute standoff in a Thousand Oaks parking lot.

The chase began by making its way at intermittent speeds from Oxnard to the Promenade at Westlake Village at the intersection of Thousand Oaks and Westlake boulevards.

Shortly before 12:30 p.m., the driver pulled into a parking space and several patrol vehicles from multiple agencies blocked the parking lot's exits. Other officers and deputies positioned their units at a distance from the truck.

According to the California Highway Patrol, the driver was possibly armed with an AR-15 rifle.

A suspect driving a U-Haul truck on shredded tires was arrested in Long Beach following a chase through several Orange County cities Monday.

At about 1 p.m., the suspect managed to drive out of the parking lot and the pursuit resumed. A column of law enforcement vehicles followed behind the truck as it drove into Camarillo.

The suspect eventually pulled over onto the dirt shoulder of an empty road and exited the truck. He was immediately surrounded by sheriff's deputies, one of whom tackled the driver to the ground.