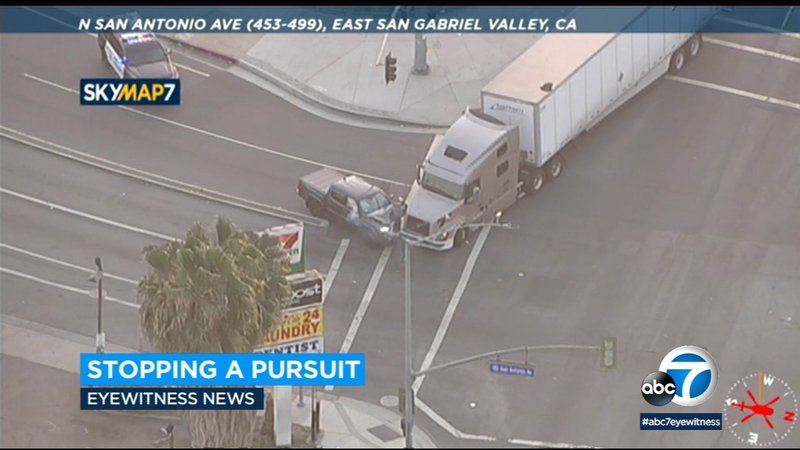 LOS ANGELES (KABC) -- A big rig driver is speaking out after he ended a pursuit of a murder suspect earlier this week by intentionally crashing into the car being chased.

Ahmed Shaaban knew law enforcement was in pursuit of the murder suspect Tuesday evening when he positioned the big rig in front of the suspect's car at an intersection in Pomona.

When Shaaban spotted the driver at a red light, he decided to end it right there.

The suspect ended up slamming into the big rig, bringing an end to a dangerous and erratic chase across multiple Southern California counties.

The woman inside the truck of a fleeing murder suspect shared new details on an hours-long pursuit through four counties that began in Murrieta and came to a crashing end in Pomona.

"My truck was already out there, and if he passed, I would have blocked all the cops and he would have gone," Shaaban said. "I had to end it before he killed someone, or hit a car or hit a kid."

The big rig's dash cam captured video of the moment the vehicles crashed.

The suspect was taken into custody and his passenger was questioned by authorities and later released.

Shaaban says the vehicle, which he uses to make his living, is probably totaled. He's afraid insurance won't cover it, since technically, he crashed it on purpose.

But he says he would do it again, and he does have a GoFundMe, which he hopes will help out.