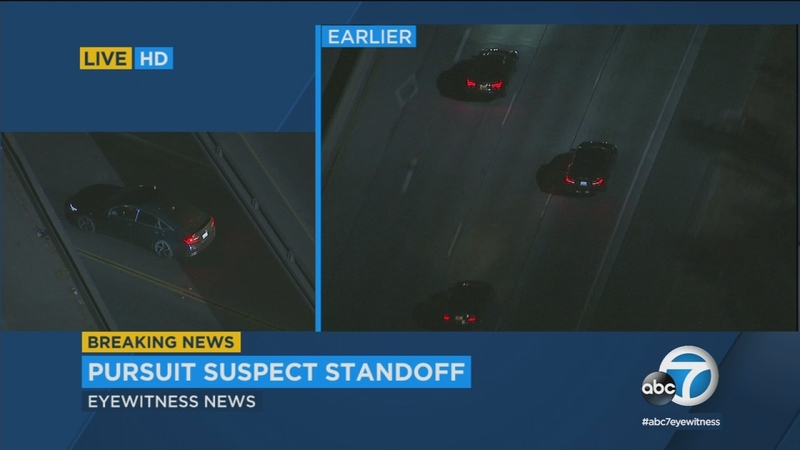 PASADENA, Calif. (KABC) -- A high-speed chase on multiple freeways in the San Fernando Valley Saturday night led to a tense standoff in Pasadena and two men were later taken into custody.

The suspect, traveling in a dark-colored sedan, drove recklessly along the 210, 405 and 5 freeways in Sylmar, Mission Hills and Van Nuys.

He or she appeared to be traveling at speeds above 90 mph, veering across lanes as several patrol vehicles followed close behind.

At one point, the driver crossed multiple lanes from the 5 Freeway to the 405, narrowly missing other vehicles on the road and losing one patrol vehicle.

The suspect got back onto the eastbound 210 Freeway in Van Nuys and made his or her way into the La Canada Flintridge area.

The vehicle appeared to slow down and eventually come to a stop near the Lincoln Avenue exit in Pasadena shortly after 11 p.m.

A hand from a person on the passenger seat was seen extended out from the passenger window as the vehicle remained stopped for several minutes.

It was believed several people, possibly children, were in the vehicle as the apparent standoff continued at midnight.

LAPD officials said the unidentified suspect, wanted on weapons and explosives charges, was recognized by police when the chase began.