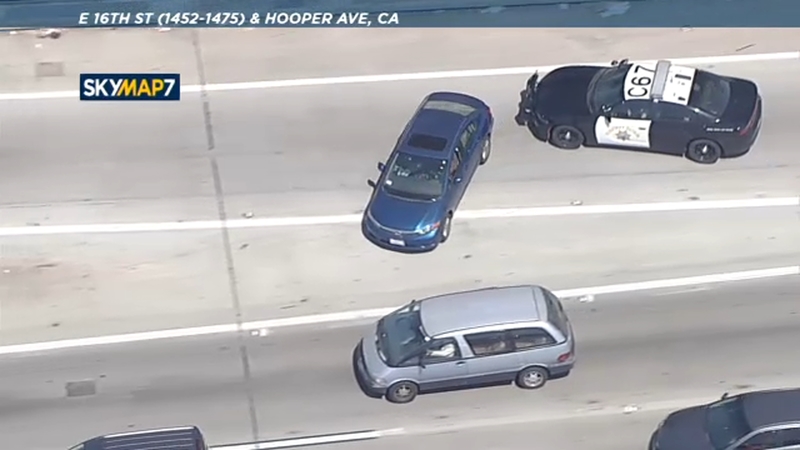 Chase suspect reaches speeds up to 110 mph while evading CHP

LOS ANGELES (KABC) -- A driver reached speeds of up to 110 mph while leading multiple law enforcement agencies on a chase through downtown Los Angeles and into the Hollywood area on Friday afternoon.

The pursuit made its way westbound on the 10 Freeway before transitioning to the southbound 5 Freeway, continuing on after an attempted PIT maneuver by the California Highway Patrol failed amid moderate traffic.

The suspect then exited onto surface streets, driving past the iconic Capitol Records building as Los Angeles Police Department units took over the chase.

LAPD patrol units intermittently backed off, presumably in the interest of public safety, while a police helicopter continued to follow the blue sedan from overhead.

Afternoon traffic was sparse as the driver maneuvered through the streets of Hollywood, at times dangerously crossing over into oncoming lanes.

The woman inside the truck of a fleeing murder suspect shared new details on an hours-long pursuit through four counties that began in Murrieta and came to a crashing end in Pomona.

At one point the driver stopped in the middle of a residential street, got out of the car, opened a rear door and the trunk, then closed both and continued driving.

Police eventually decided to call off the pursuit.

Authorities said the chase was initially prompted by a traffic violation but did not provide details.